Ed Elisian was a curious character, great friends with Bill Vukovich, he did cause the accident that marred the 1958 Indy 500. He was suspended for 12 months and died in his first race back behind the wheel. 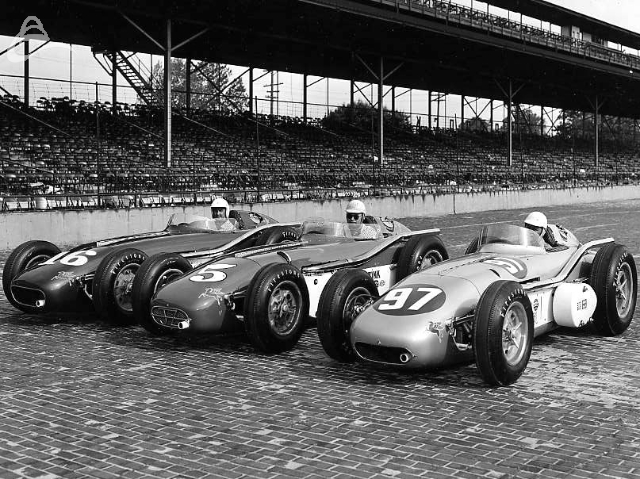 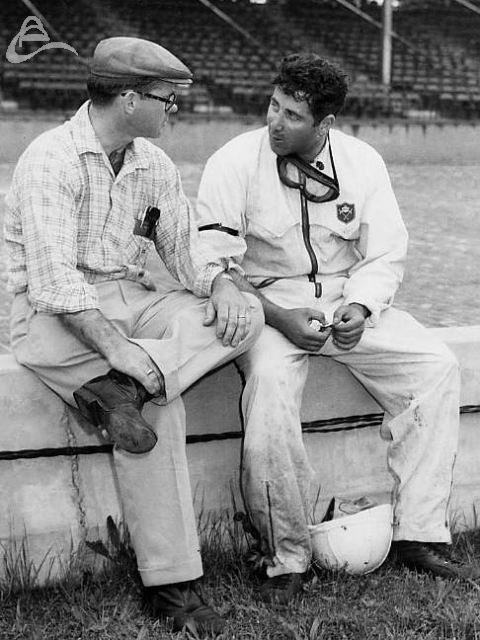 Ed Elisian was a curious character. He came from poor family in Oakland, California and had a rough childhood. He was a big, hulking guy with an Eastern European face and a full head of dark wavy hair. He was a good friend of Bill Vukovich.

Elisian made five starts in the "Indianapolis 500" beginning in 1954 when he started thirty-first and finished eighteenth. There's a familiar photo of Elisian visiting Vukovich in the winner's garage after the 1954 "500."

In 1955 Len Duncan qualified on the last day by bumping Johnny Kay. Elisian then went out to qualify at 5:50 PM with Duncan on the bubble. Elisian was given the red flag when he didn't take the green to start his run by what was mistakenly counted as his third warm-up lap. Elisian and car owner Pete Wales protested that Ed had only taken two laps and should not have been called off the run.

After nearly an hour spent checking and rechecking, Chief Steward Harry McQuinn ruled that the timing officials were wrong and Elisian should be allowed to complete the qualification run. This brought protests from Duncan's crew saying the time had run out and no more runs should be allowed.

Elisian's qualification run was completed sometime after 7:00 o'clock. It became known as "The Midnight Ride of Ed Elisian". He posed for press shots with his crew holding lanterns.

Elisian qualified twenty-ninth and finished thirtieth in the race in which Vukovich lost his life. Elisian stopped his car at the scene of Vukovich's fatal crash, which happened on the 57th lap, and was the first person to reach the burning car.

Elisian is most famous for being blamed for causing the crash in turn three on the first lap of the 1958 "500" which eliminated seven cars and claimed the life of Pat O'Connor.

Dick Rathmann and Ed Elisian started the race 1-2 with Jimmy Reece on the outside of the front row. Pat O'Connor started behind them in the middle of row two. Both Rathmann and Elisian jumped the start, with Reece following them past the pace car. The pace car did not speed up and the three were waved ahead. This caused all kinds of confusion. Eventually the front row got back into position and the race started. Rathmann and Elisian went wheel to wheel and as they went into Turn 3 Elisian tried to pass Rathman but spun into him, sending them both into the wall and starting a 15-car pileup. Pat O'Connor's car flipped in the ensuing accident and caught fire. Speedway medical officials said that he was probably died of a fractured skull in the initial impact. There were stories, and they were just stories, at the time that Elisian was in financial trouble and that he had placed a large bet on leading the first lap thus explaining his rather desperate move to pass Rathmann.

Elisian also made headlines for being arrested on bad check charges and for taking a swing at a police officer.

Elisian was suspended and didn't return to Indy car racing until August 1959 at Milwaukee where driving Ernie Ruiz's green Travelon Trailer Special out of Modesto, California, he was killed in a crash in turn one on lap 29.

Elisian was not the most popular driver and when his car hit the outside wall and turned over, apparently the other drivers failed to slow down to permit marshals with fire extinguishers to get to the crash. The car caught fire and Elisian died in the flames.

The race was red flagged and when it was restarted one hour later, Card Roadster took the win with Johnny Thomson finishing second.

I can't believe that this is true. Surely there would have been an enquiry. The tragic death of Roger Williamson was a bad enough stain on the copybook of GP racing but this would put that in the shade.

Ed Elisian can't have been that bad. In the aftermath of Bill Vukovich's crash, Elisian slowed down immediately and stopped on the infield grass. He got out of his car and ran across the track motioning toward an ambulance, which had been parked on the south side of the footbridge and was already rolling, to head toward the Vukovich car. He was nearly hit by Pat O'Conner in the Anstead Rotary Special just as he jumped over the fence. He then tried to "lift it off" and that people had to “grab him and get him away". Apparently Elisian himself said the car was "too hot to grab". Elisian had to be given a shot to calm him down. The owner of Ed's car, Pete Wales, was reported to be furious that he had stopped.

Elisian became the only driver in the annals of Speedway history to ever pulled off the track to help another driver. Elisian received a sportsmanship award for stopping and going to help Vukovich.