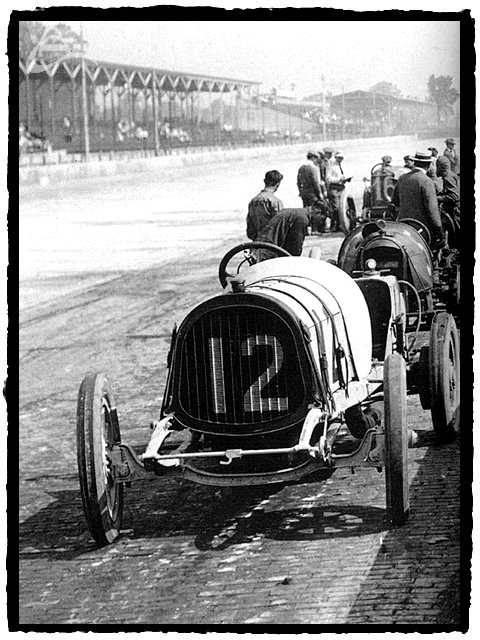 Howdy Wilcox was one of the preeminent drivers of the early days of racing. He won an event at the Indianapolis Motor Speedway before the "500" was conceived, taking a 100-mile race for the Remy Trophy in 1910.

In 1915 at the Indy 500 Howdy Wilcox won the honor of "sitting" on the pole for the first time with a one lap speed of 98.90 mph, also the first one lap record in Speedway history. In 1916 he won the American GP in a Peugeot EX5 with J.Aitken.

He competed in the Indy 500 from 1911 through 1923, only missing the years the race was cancelled due to WWI. He won the event in 1919 in one of the old 1913 Lyon Grand Prix Peugeot's, it was the last win for a European maker until Jim Clark won in 1965. It was also Goodyear's first victory in the race. He was also the first American winner since Joe Dawson in 1912.

Wilcox was a native Hoosier. His win so moved the band that they struck up a now familiar tune, 'Back Home Again in Indiana' a song performed to this day prior to the Indianapolis 500. He also won the AAA National Championship the same season. For the Indianapolis 500 of 1920 Peugeot commissioned their designer, Maurice Grémillon, to develop a car to meet the new 3-liter formula. Inspired by the pre-war twin-cam engines, Grémillon took what seemed to a logical step forward and designed engines with three overhead camshafts, 5 valves per cylinder and twin ignition from two separate magnetos. In most ways, these cars followed pre-war practices but with some differences. These 4-cylinder engines went into chassis that were upswept over the front axle, reducing ground clearance. Four cars were built, three being sent to America for Indianapolis, and one kept in reserve. Drivers were André Boillot, Jules Goux and Howdy Wilcox.

Unfortunately, the cars did not live up to expectations. Ralph de Palma took the Indianapolis pole at 99.15 mph in a French-built Ballot, an elaboration of the pre-war Peugeot dohc principles. None of the three Peugeots finished the race. Whatever the theoretical advantages of the triple camshaft engine, it was not a success. The 1920 Indianapolis cars were returned to France and rebuilt with dohc cylinder heads. In The Autocar of April, 1921, W.F. Bradley notes that the larger of these two cars had the engine and gearbox in unit and was assigned to Jean Chassagne for Indianapolis while the smaller-engined, separate gearbox car was driven by Wilcox. In 1921, the Peugeots were again unsuccessful, Wilcox retiring after running as high as third. in 1923 he won the Indy 500 again driving a Miller with relief from T.Milton

He was killed in the Altoona 200 mile race.