Mike Beuttler showed great promise in Formula 3 before graduating to Formula 2 and then Formula 1 in 1971. He raced March F1 cars financed by a group of wealthy stockbroker friends. He continued in 1972 and 1973 but retired from racing at the end of the year. He eventually moved to San Francisco where he died of AIDS in 1988. 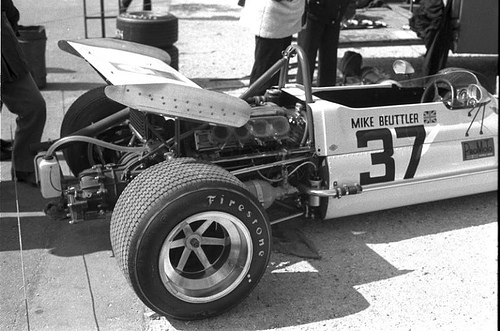 Born in Cairo in 1940 of English parents while his father was serving in the Army, Mike became involved in the motor racing world immediately upon leaving school at the age of 19, assuming administrative duties with the Chequered Flag team. He had occasional chances to drive their front-engined Gemini car, but only when he struck out on his own - at the comparatively late age of 24 -with a Brabham F3 in club and Libre events did his racing career start in earnest.

With the backing of stockbroker colleagues Ralph Clarke and David Mordaunt -which was to be so vital to his progress to Formula 1 - Beuttler moved into F3 for the end of 1967 with encouraging results given the calibre of opposition. Staying with the class for three another seasons, Mike won three high-profile events, at Silverstone, Brands Hatch and Montlhery, in 1970, gaining third place in the Shellsport F3 championship and second place in that year's Grovewood Awards for his efforts.

For 1971 ambitious plans were laid to race a March 712 M. Alistair Guthrie joined the roster of backers and with the factory 'overseeing' his efforts, Mike undertook a full European F2 series. However, it was to prove a bitter disappointment, with the car beset by sundry maladies until the last round when he won the Madunina GP at Vallelunga. March had also helped him into Formula 1, without any great success.

It was the same recipe for 1972, with the addition of another backer - Jack Durlacher - to help pay the bills but no worthwhile results in Grand Prix. The most interesting aspect of the season, in fact, was the team's decision to adapt their 722 F2 car to accept the Cosworth engine : the 721 G. So much better was this machine's handling than that of the notorious 721X that the full-works cars were quickly consigned to history and Peterson and Lauda found themselves the beneficiaries.

Beuttler and his partners gave it one more shot in 1973, starting the season with the old car, but he was no more competitive when the new March 731 finally arrived. Mike called it quits and, after a single outing in the Brands Hatch 1000 Km in 1974 in a 2 liters 74 S March 2 liters, turned his back on racing and went into business. He later moved to San Francisco, where he died of AIDS in 1988, at the tragically young age. of 48.