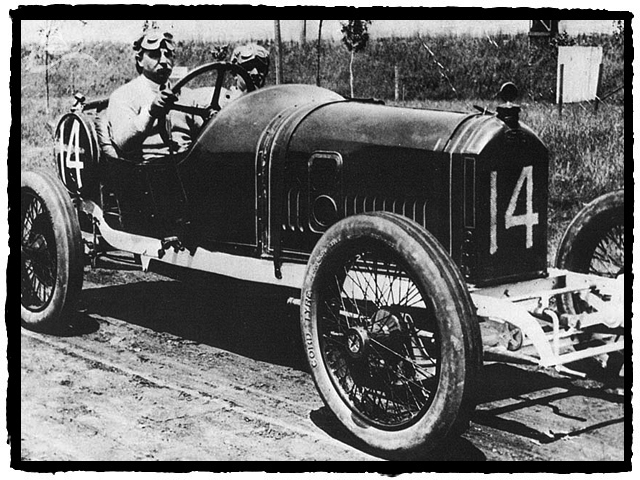 He was born in New York City, New York of Belgian parentage, he later became a French citizen.

He was an aviation pioneer holding Flying Licence Number 3 in Belgium.

Started racing in 1902 ACF with Gobron-Brille.

In 1903 and 1904 he made a number of successful attempts on the Land Speed Record.

On July 5th 1905 he was part of the French team in the Gordon Bennett Cup. Raced a DeDietrich, he managed to pass Cagno and Nazzaro to take third on the second lap. However on the third lap a water pipe broke and he dropped back finishing 6th.

In 1906 he won the Circuit of Ardennes in a Lorraine-Dietrich.

In 1907 he won the International Race from Moscow to St. Petersburg in Lorraine-Dietrich 60 HP.

In 1908 he raced in the inaugural American Grand Prize in a DeDietrich.

During December 1913, near Oostende on the stretch Mariakerke-Middelkerke, Arthur Duray made several attemps to break the existing Kilometer World Record of 228 km/h established by the American Bob Burman with a 200 hp Benz in April 1911. In front of the radiator, the Fiat S76 had a special wind-cutting extension, used also by other manufacturers for record attempts. The Automobile Club de France brough their electrical timing device from Paris to Oostende especially for this official record attempt, as required by the AIACR. Duray attained speeds above 220 km/h but not sufficient to pass the existing record.

From Fiat's house journal "Rivista Illustrata Mensile" No. 9 - 1914 - a copy was published in Brooklands Books : "The Land Speed Record 1898 - 1919" : "We have received from the well-known French driver Arthur Duray this description and his impressions of the speed tests he did with one of our 300 HP cars : Prince Boris Soukhanoff bought a Fiat 300 HP car a few months ago with the aim to set a new world speed record. He had the car shipped to Moscow where he tested it, but the speed he reached convinced him of the difficulties of driving such a fast car, so he came to France to look for a professional driver and I had the pleasure to be chosen. The car was shipped to Brooklands, after just a few laps I realised it was pointless to insist on this track. I had no wish to kill myself. I telephoned Prince Soukhanoff to tell him I was ready to show him the perils of the English circuit. I drove him at a speed of about 200 km/h. but after two laps he signalled me to stop; at one time the centrifugal force almost made me go over the banking where Percy Lambert was killed. I grazed the edge by just 10 centimetres! The test convinced the Prince how dangerous it would have been to insist and he asked me to look for another track. I thought I could use the road between Arles and Salon, the best in the world for such an attempt, but the Sports Committee of the ACF stated that they would not recognise records set away from staged meetings. I went to Italy without success. At last I found the Ostend road, though it had the short-coming of not being long enough to allow a good run. I made fourteen test runs at over 200 km/h; on some of the runs I reached a speed of 225 km/h on the timing apparatus. Unfortunately, the markings on the tapes were not clear enough, so these records could not be ratified by the International Committee. The only good tape we could get shows a speed of 211,661 km/h, attained on the 8th December. With Mr. Jostens, official time keeper of the ACB and a skillful electrician, we had to make new contacts to record the passing of the car on the road. I feel sure that next Spring, with the same car, I will be able to seriously attack the record. It was because of the weather that my attempts were interrupted. During the six weeks spent in Ostend I only had two favourable days : there is not just the car to take care of, there is also the organisation, laying the wires along the road, getting the time keepers, etc..., all things which require quite a long time to set up. You also have to be aware of people trying to stop the attempts. The Director of the Ostend Tramways - an earnest "autophobe" - called the police whenever he knew we were out for an attempt. My feelings? To engage first, second or third gear is relatively easy, but when it comes to engage fourth whilst travelling at 190 km/h, that is a different story. One has to hold the steering wheel firmly, push the gear lever forward and pay attention so as not to jump on the side-walk, because the moment the air enters the carburetter the bounce causes you to feel the seat hurting your back. In the time it takes to say this you are through the two kilometre run-way. You see the time-keepers. The moment has come to break the record and the timing starts. For a tourist one kilometre is relatively long, but at that speed you have hardly seen the first signal before the second is well behind you. You just have time to count to 17! I was disappointed to note that at Ostend the run-way is too short and the top speeds (230/240 km/h) can only be achieved at the end of the measured kilometre. For a professional the job is not too terrible during the record, but it is afterwards that things become really difficult; when you cut off the throttle the car tends to turn sideways, so you have to keep it running straight and since there are just 1500 metres to the end of the straight, this is far too short and the brakes are not able to stop the car. When I cut the throttle off oil pours on to the exhausts and over the 1500 metres the riding mechanic turns completely from white to black, this "nigger" is no other than Prince Soukhanoff, the perfect sportsman. When speeds like these are reached, the smallest bump on the road makes the four wheels airbone at once, which the spectators see perfectly. As for me, I feel it and it reminds me of the time when I was an aviator." Arthur Duray

Duray fought in the French Army in the First World War.

The S76 used by Duray at Ostende was still around after the war and Duray was prepared to make another attempt. But Sukhanov, who was still the owner, was untraceable. So the S76 remained in Turin until 1925 when another buyer was found.

1924 raced at Brooklands with his d'Aoust in a triangular match race against Eldridge and Thomas. The D´Aoust was manufactured between 1912 and 1924 in Brussels. They built a race car for Arthur Duray fitted with a 9.4 litre Hispano Suiza engine.

On July 13, 1924 the Coupe de L'Autodrome was held on the Miramas-Istres Autodrome not far from Marseille in the Provence region of France. This 160 km event was run under Formule Libre with five starters. It was won by Martin de Alzaga in his Sunbeam, ahead of Duray in his D'Aoust Hispano-Suiza, Albert Guyot and Mamlouk.