French racing driver who competed at Indy on four occasions, winning in 1914 and finishing second in 1920.

Other links relevant in this story: 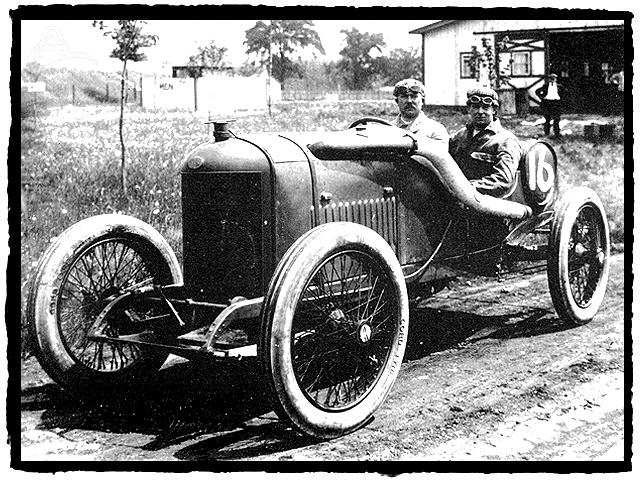 Two Delage were taken to the Indianapolis 500 in 1914 by W F Bradley and he was rewarded with a win, at his first attempt, for RenÃ© Thomas at an average speed of 82.47mph.

René Thomas was one of the top French racing drivers. In 1911 Louis Delage entered a team of 3-litre cars in the Coupe de L'Auto race to be driven by Bablot, Thomas, Guyot and Rigal. The Coupe de L’Auto was over 12 laps of a circuit near Boulogne, a total distance of 387 miles. Bablot won with the other cars finishing 3rd and 4th.

For 1913 the Delages the engine size was doubled. Bablot won the Grand Prix du Mans in 1913 with Guyot second, and Guyot was leading the French Grand Prix when he had a tyre burst, but he finished 5th behind Bablot who was 4th. Two of these cars were taken to race at the Indianapolis 500 in 1914 by W F Bradley and were rewarded with a win, at his first attempt, for René Thomas at an average speed of 82.47mph.

After WWI, Thomas went back to racing and in 1919 travelled to America for the Indy 500 with a Ballot. He put the car on pole but has a dissapointing raec completing the course in 11th place. He also raced in the Targa Florio that year driving a Ballot. He was leading commfortably and did not realise the fast approaching Peugeot of Boillot. By the time his mechanics had alerted him it was too late and Boillot flashed past him only to crash on the last corner. The Peugeot was pushed free and Boillot crossed the line in reverse. He was protested but Ernest Ballot the owner of the second place car, in an act of exteme sportsmanship, persuaded him to return to his car, drive back to the point of their crash and then re-cross the line in the right direction. André Boillot was thus declared the winner.

Thomas entered the Indy 500 again the following year, this time with a Ballot. After qualiying in 18th place, he crossed the line in second place. He made one more visit to the Brickyard in 1921 with Sunbeam going out after 144 laps with a broken water hose.

Delage were restricting their activities to sprints and hillclimbs with an overhead valve 5,136cc 6-cylinder racing car for René Thomas. He broke the record at Mont Ventoux in 1922 and 1923 and at La Turbie in 1923 and 1924. Thomas also made fastest time of the day at Breslav-Jilovište in Czechoslovakia in 1924.

For the 2-litre Grand Prix formula of 1923 Planchon designed a compicated V-12 with four overhead camshafts giving 105bhp unsupercharged. The first outing, the French Grand Prix, resulted in a retirement for Thomas.

The biggest Delage racing car was the 10,688cc V-12 with push rod operated valves built in 1923. It briefly held the World Land Speed Record in July 1924 when Thomas was timed at 143.29mph at Arpajon. The same combination of car and driver also broke the record at Gaillon in 1925.