Driving Maseratis, Ferraris, Delahayes, and Bugattis against some of the greatest drivers of all time, Dreyfus won 36 Grand Prix.

Other links relevant in this story: 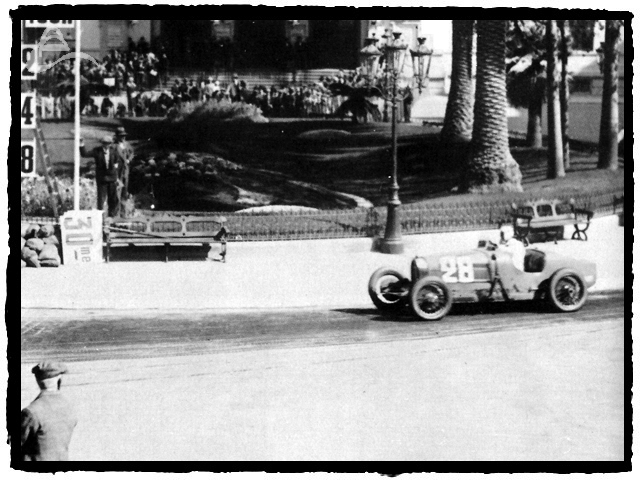 RenÃ© Dreyfus in his Bugatti T37A on his way to 5th place.

Born and raised in Nice, France, the son of a wealthy linen merchant, Dreyfus showed an early interest in automobiles, learning to drive before he was nine. The middle of three children, his brother Maurice was both his business partner and his racing manager.

He started racing a Mathis and joined the Moto Club de Nice. In 1924 he won his class in the first race he entered. He then aquired a Bugatti Brescia and later a T35B. He went on to win three consecutive French Riviera championships.

He then joined Ecure Friderich and finished 8th in the 1928 Targa Florio and took his first major victory at Dieppe in 1929. That year he entered the inaugural Monaco Grand Prix, finishing first in his class and fifth overall.

He was back in 1930 and took a surprice victory. The Ecure Friderich Bugatti had been fitted with an extra fuel tank with enabled him to complete the race without stopping. Thus beating the works Bugatti team led by Louis Chiron by 22 seconds.

The next few years saw the Nazi government in Germany subsidise the Mercedes-Benz and Auto Union racing teams which were run with military precision. It is however interesting to note that the sums of money involved were not as great as many believe. According to Chris Nixon's "Racing the Silver Arrows" the amount was 500,000 Reichsmarks (or just under $120,000) divided between the two teams. Many of the top European drivers were hired. However for Dreyfus, as a Jew, this was not an option and was thus confined to driving less competetive cars.

He joined Scuderia Ferrari in 1935, the year he married, and took wins in the Marne and Dieppe Grand Prix. He also finished 2nd in the Italian GP. In 1937 he signed for Delahaye racing sports cars and raced a Maserati in Voiturette racing, winning at Tripoli and Florence.

In an effort to induce manufacturers to develop new cars which would be competitive with the Germans, in 1937 the French government announced the ‘Prix du Million’, or the Million Franc Race. The prize money was a million francs, and in order to ensure that the competition tested each car’s ultimate limits rather than just the driver's skill in passing other drivers, the event, starting on the 27th of August, was a time trial against the clock at Montlhéry. Dreyfus drove a Delahaye 145 running on special Dunlop tires and at the end of the first day was just behind the Bugatti. On the last day he ran hard, pushing the Bugatti to breaking point and taking the prize for Delahaye.

In 1938 Dreyfus drove a Delahaye at Pau, a tight circuit running through village streets, beating the legendary Rudolf Caracciola in the Mercedes-Benz team's all-conquering Silver Arrows and becoming a national hero in France. He was also victories at the Cork GP that year.

When World War II broke out, Dreyfus joined the French Army, where he served as a truck driver. In 1940, however, he was abruptly sent by the French government to the United States to represent France by driving a Maserati in the Indianapolis Motor Speedway Memorial Day 500. Although the previous year's race had been won by a Maserati driven by American Wilbur Shaw, neither Dreyfus nor his team partner René Le Bégue were familiar with the mechanical requirements and the very different rules of racing at Indianapolis; this problem was exacerbated by both drivers not knowing English, and by the American racing community's reluctance to see a European win the "Great American Race." Despite suffering numerous substantial setbacks and penalties for not understanding the details of the rules, beginning with their attempts to qualify their two cars, Dreyfus and LeBegue succeeded in co-driving the one car which they did qualify from the back of the grid to tenth place. Ironically, Shaw again won the race in another Maserati.

In the meantime, the Germans had overrun Paris, and as a Jew who had famously humiliated the German racing effort, Dreyfus was advised by the French government not to return to occupied France. Instead he settled in New York City. When the United States entered the war in 1942, Dreyfus enlisted in the American army and served in Europe as an interrogator.

After the war, in 1945 he became an American citizen and brought his brother Maurice back to New York, where they opened a French restaurant, "Le Gourmet."  This soon became the semi-official New York meeting spot for the world's automobile racing community, the rivalries of the past having been overcome by the spirit of fraternity. He sold the restaurant in 1952 and moved back to France.

Dreyfus had continued to race sporadically, and competed in the 1952 24 Le Mans 24 Hour race.

He moved back to the USA a year later and opened an other restaurant, "Le Chanteclair", at 18 East 49th Street in New York. He raced for the last time that year at Sebring in the 12 Hour race.

In 1980 he was invited back to the Monaco Grand Prix to celebrate the 50th anniversary of his victory. At age 75, he personally drove throughout Europe touring all the sites of his racing career, receiving public celebration and honors at each stop. At the banquet following the race, he was brought to the stage to sit once again in the Bugatti in which he had won, half a century earlier.