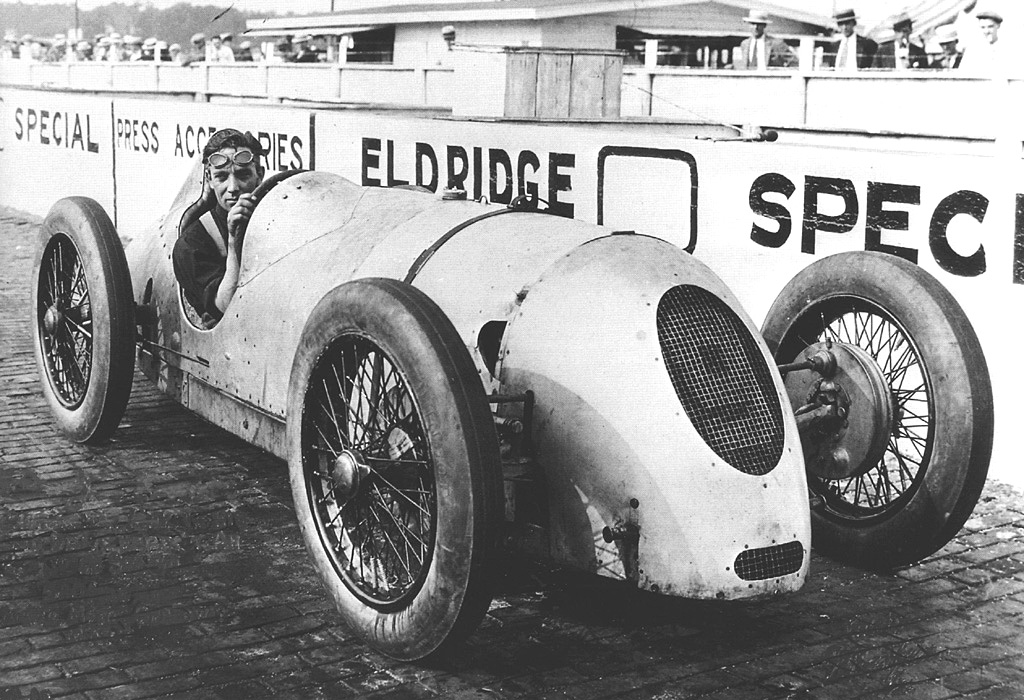 1926 Indy 500 Eldridge-Anzani driven by Douglas Hawkes in the race with relief from Ernest Eldridge. DNF after 91 laps when the camshaft seized.

W. Douglas Hawkes was born in Barton Regis, Bristol, Gloucestershire. He started racing in 1914. With the scent of war in the air, he raced a two cyclinder 965cc Victor. Lapping at around 44 mph he was soundly beaten by all and sundry, with Martin's Singer setting the fastest lap at just over 70 mph.

War interviened and it was not until 1920 that he returned to racing. He had aquired an 8 valve V-twin Morgan and the 1912 15 Litre Lorraine Dietrich, 'Le Vieux Charles Trois' which Malcolm Campbell had bought in France at the end of hostilities. He took two wins with the Lorraine at the Whitsun Meeting at Brooklands that year and took another win with the Morgan at the Summer Meeting plus two seconds with the Lorraine. He also raced a GN at Le Mans on August 28th in the Grand Prix de l'UMF and the Coupe des Voiturettes the following day, finishing 5th and 8th respectively.

In 1921 he bought a Horstman with a British-Anzani engine. At the whitsun meeting at Brooklands he finished second in the '75 Long' to woolfe Barnarto in his Calthorpe. He was back at the Coupe des Voiturettes at Le Mans driving the Horstman though he failed to finish when the rear axle failed. Back at Brooklands for the August Meeting he won the Short Handicap in the Lorraine and followed that with another win in the Lightning Short, lapping at 101.43 mph. At the Autumn meeting he was 3rd with the Loraine and in November in the Junior Car Club 200 he finished 5th.

In May 1922 he travelled to America with a pre-production 3 litre Bentley. He entered the Indy 500 finishing an impressive 13th with an average speed of 81.900 mph. The Americans were impressed with the car's speed, especially considering that it was basically a production car.

In June he joined WO Bentley and Frank Clement in a three-car team for the TT race on the Isle of Man. Racing production cars against the works racing teams from Sunbeam and Vauxhall, the Bentley team were the only ones to get all cars to the finish, crossing the line in 2nd, 4th and 5th, winning the team prize.  He won the Light Car and Cyclecar Handicap at 80.46 mph with a Morgan-Anzani at the BARC August Bank Holiday meeting though he retied in the Junior Car Club Cyclecar 200, retiring after 22 laps.

Later, in November, he raced an Aston Martin in the Gran Premio do Penya Rhin at Villafranca but once again failed to finish, going out with mechanical failure after 15 laps. Back at Brooklands later in the month he set a new K class record for the flying half mile at 87.89 mph in the Morgan.

He raced in the Junior Car Club 200 and the Junior Car Club Cyclecar 200 at Brooklands in October 1923 driving his Horstman British Anzani to 5th but retiring his Morgan Anzani in the later race. Towards the end of the season he raced at the Gran Premio d'España Voiturette at Villafranca in Spain with Zborowski driving GP Aston Martins. Zborowski led the race but had a puncture and had to settle for second place, Hawkes retired.

In September he set a number of record at Brooklands, raising the flying mile record for his class to 90.38 mph as well as setting H1 records for 5 and 10 miles.

In 1924 he moved to France and set up workshops under the banking at Montlhéry. He continued to race at Brooklands but he retired from the Junior Car Club 200 whent he magneto failed on his Salmson VAL. In October he raced at Montlhéry in the Grand Prix de l'Ouverture finishing 3rd in his Ballot Indy.

In 1925 he aquired the Jappic which he renamed the HS. The car weighed just 4 cwt. The driver's head just 29 inches from the ground. He had the car taxed for road use nd used it for it for both 350cc and 500 cc record breaking attempts at Montlhery. Unfortunately the car was lost when his workshops beneath the banking at the circuit were destroyed by fire

In the 100 Short in August at Brooklands he finished second in the old Lorraine despite only running on three cyclinders at the finish. the race was won by the Crossley Tourer of Cushman. In the Lightming Long Handicap he finished fourth after a race long battle with the Vauxhall of JD Barclay who just edged past him to take third on the last lap.

He was back at Indy in 1925 driving one of Ernest Eldridge's Eldridge Anzanis. He qualified 17th but retired in the race when the camshaft seized. Along with Eldridge he also entered the races at Salem-Rockingham, Altoona and Atlantic City but failed to qualify for any of them.

At the Junior Car Club 200 in September he drove the Eldridge Anzani again but crashed out on the first lap, and in October, he races it in the Grand Prix du Salon at Montlhéry, posting another DNF.

While Eldridge was recovering from the injuries he sustained while attempting distance records at Monthlèry, Hawkes drove Eldridge's Miller in the Grand Prix de l'Ouverture at Monthlèry but retired with supercharger problems.

He retied from driving but was still involved in the sport. He had prepared Gwenda Stewart's cars in his workshops and with her Super Aero in the late 1920s and early 1930s she was fastest over the flying kilometer as doing well in long distance races. She held close to 50 records in the class J (three-wheel cyclecars with passenger not exceeding 750cc) and K class (three-wheel cyclecars not exceeding 1.100cc).

He bought into the Derby factory in 1930, helped by his then father-in-law Charles Kinisson. He still owned a small engineering company in England, and with his workshops at Montlhéry, he had the industrial experince to help Derby in France. When his Miller was damaged in an accident he had it rebuilt by the Derby factory and renamed it the Derby Miller. In 1930 he had to put more money into the business and in late 1933, Hawkes got the factory to build a roadster to be entered into the Monte Carlo Rally driven by Gwenda. She also drove at Le Mans in 1934 and 1935 in a Derby 1100. However by now the economic situation was desperate and the company closed its doors in 1936.

In 1937 he married Gwenda Stewart. The following year he was at Brooklands for the Junior Car Club International Trophy and was one of the spectators injured in Joseph Paul's crash which claimed the lives of a young girl and Austin designer Murray Jamieson. Kay Petre was also amongst the injured.