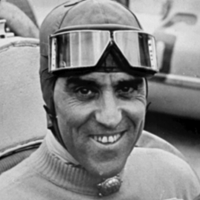 Tazio NuvolariNuvolari was born in Castel d'Ario, Mantua. He was the fourth son of Arturo Nuvolari (a well off farmer and a known cyclist) and his wife Elisa Zorzi.

Nuvolari has been (and still is) admired for his many special qualities and his human characteristics.

He obtained the motorcycle race licence in 1915, when he was 23, but was soon recalled to the Army as a driver, when Italy entered WWI. In 1917, He married Carolina Perina, by a civil ceremony (quite a scandal for those times).

His career started with motorbikes and he had his first official race on June 20, 1920 in Cremona at the Circuito Internazionale Motoristico. He won his first race on March 20, 1921 in Verona.

He became a professional driver, and soon met Enzo Ferrari (still a driver and not yet the founder of Ferrari). Nuvolari quickly became very popular in Italy, where he was called "Il campionissimo delle due ruote", "the two wheeler Campionissimo" (the same title will be later given only to Fausto Coppi, bicycle champion).

He begun testing himself in Grand Prix motor racing and he won the prestigious Targa Florio, in Sicily. After that, he decided to dedicate himself only to cars. His fame grew rapidly and famous poet Gabriele D'Annunzio gave him a little golden turtle with dedication: "To the fastest man in the world, the slowest animal". He obtained victories on most of the Italian circuits and in the Mille Miglia. In 1932 he dominated Grand Prix motor racing, winning the Monaco, French and Italian Grand Prix events.

Perhaps his greatest ever victory was the German Grand Prix of 1935, where, in an outdated and uncompetitive Alfa Romeo he defeated Germany's vaunted Auto Union and Mercedes Benz racing outfits in front of Adolf Hitler, who was said to be outraged and refused to shake his hand afterwards. The hosts were so expectant of a German victory that they didn't have an Italian anthem to play.

Personal misfortune (in a few years he lost both of his two sons) made people even more passionate about him. His determination led him, proverbially, to insist on racing even when the car was losing components, or burning, causing several accidents. He also once competed in a Grand Prix with a broken arm.

Ferdinand Porsche called him "The greatest driver of the past, the present, and the future."

Some of Nuvolari's major career victories: