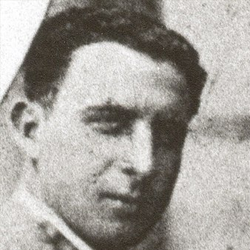 Balestrero's career lasted 25 years and included over 200 races. He was run over and killed while showing his papers to a policeman who had stopped him on the Turin Autostrada.

Renato Balestrero died 73 years ago, he was 50

Renato Balestrero from Lucca was a very busy and successful racer whose career had a 25-year span and included over 200 races. Balestrero started racing in 1924 with an OM. The list of his best placings is exemplary of a solid and quick semi-professional driver of the Italian school, with victories in some of the Italian classic races, such as Montenero, Pescara and Tripoli. Won the 1st Libyan Grand Prix driving a 2.0L O.M. as early as 1925. Raced Bugattis in 1927.

Balestrero moved up to international racing in 1934 when he drove a Maserati for Gruppo San Giorgio, and also raced his Alfa Romeo "Monza" which he purchased in 1933. Balestrero entered the new Monza in the 1934 Mille Miglia and placed a creditable sixth co-driving with Sanguinetti. Balestrero later sold the car to Uboldi Martini, but borrowed the Monza in April to enter the Mille Miglia, again with Sanguinetti, and again placed sixth. In December of 1935, Balestrero bought the car back from Martini and immediately sold it to Giovanni de Rham, who transferred ownership to his brother Giacomo.

From 1935 on he raced an Alfa Romeo Tipo B, entering it among other races in AVUS, Eifel GP and German GP 1937. Then he raced an Alfa Romeo 308 in 1938. He came back to Italian races after the war with a third in a Fiat 1100 at Genoa in 1946. Then in 1947 Benevento 3rd Fiat 1100, Sanremo 3rd Alfa Romeo Monza, MM 9th Fiat 1100 with Bracco. He was Italian Champion for the unlimited sports car class, winning his class at Vercelli, Aosta-Gran San Bernardo, Voghera, Sanremo hill climb, Piacenza and Varese, all in the Fiat-Stanguellini 2800 8C.

Renato Balestrero died 1948 after an accident on the Turin Autostrada. While Balestrero showed a police, that had stopped him, his papers he was run over by another car, fell and received a fractured skull. He died soon afterwards.


Information supplied by Alessandro Silva and Hans Etzrodt with additions
-