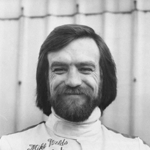 A former Firestone employee, Mike spent seven years in club racing before hitting the Formula 3 trail in 1972. With backing from a loyal sponsor in Dempster Developments, Wilds was a leading runner and occasional winner in F5 before opting to race in F5000 in 1974, but in mid-season he was given the chance to race in Formula 1, initially with a March and then with Ensign. Invited to lead the BRM team for 1975, poor Wilds only lasted two races in an uncompetitive BRM P201, the Argentine and Brazilian Grand Prix, before the Stanley axe fell. Shortly afterwards Mike split from his long-time sponsor, and rejoined the F5000 trail, racing an ex-works Shadow in 1976. Driving a Ralt, he took the F2 class championship in the 1978 Aurora AFX series, and since then he has been a star of club racing once more, enjoying himself immensely in historic and sports cars. In 1994 he was invited to demonstrate the ex-Gilles Villeneuve Ferrari 312T3 at the Goodwood Festival of Speed. Unfortunately he crashed the car quite heavily, sustaining a broken leg and other serious injuries. Undeterred, Mike was back on the tracks once more in 1995, and has since been a champion in historic racing events.