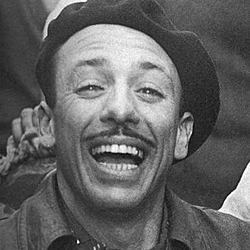 A great hidden talent, Galvez was the early rival and inspiration to Fangio back in their native Argentina both before and after the war. Oscar Galvez died 33 years ago, he was 76

Oscar Galvez was born in the Buenos Aires suburb of Caballito. He had five brothers. His father ran a small engineering business and the boys all helped out. Oscar saved up and bought a Model T Ford in 1934 which he had to hide from his father.

In 1937 he read an announcement in a newspaper of a race between Buenos Aires and Sante Fe. The brothers decided to build their own Ford-engined cars for this and other Turismo de Carretera races over the coming years.

Oscar and his younger brother Juan set new standards of preparation and performance in these gruelling road races and they were usually seriously threatened only by 'the Maestro' himself.

The Turismo de Carretera road races, a tradition in Argentina which dated back to the 1930s, were extremely dangerous. The most famous of these was the International Gran Premio Internacional del Norte. The 5920-mile route started in Buenos Aires went across the pampas plains over the Andes mountains and then turned north to Lima in Peru, before turning south back to Buenos Aires. The 1940 event took 13 days and was won by Fangio. In 1941 at the Gran Premio Internacional del Norte our man Galvez found himself forced to retire from the event on the Lima-Arequipa stage after exploring a 200 metre drop of the side of the mountain that he’d come across in the dark.

He first tried single seater racing in 1947 and finished third at Rosario behind Achille Varzi and Gigi Villoresi.

He was as much an idol in Argentina as the great Fangio himself. Galvez, nicknamed Aguilucho (the small eagle), was equally skilled at the art of circuit racing and visited Europe with Fangio in 1948 on a “fact-finding” mission sponsored by the Argentinian Automobile Club.

Fangio returned to Europe in 1949 to become famous. While Galvez, despite plenty of opportunities, chose to stay at home, and didn’t, though he always gave the Europeans a hard time when then came over for the Temporada races. In 1949 became the first local driver to beat the visitors driving an Alfa Romeo in the Formula Libre Eva Peron Cup on the Palermo circuit in Buenos Aires. He also beat Fangio that day. He was highly placed in the same event on a number of other occasions.

In 1953 he was invited to join the Maserati team for the first Argentinian GP to have World Championship status. He finished 5th in what was to be his only F1 appearance, thereby scoring points in every World Championship race he ever took part in!

'Los Galvez' continued to dominate South American road racing in their Fords through the fifties and into the early sixties until disaster struck when his brother Juan was killed in a crash early in 1963.

Oscar raced on until a serious accident the following year led to his retirement from driving and instead concentrate on managing the works-supported Ford team.

In 1989 the city of Buenos Aires announced that it would rename the Autodromo Municipal after Galvez, in recognition of his victory there in 1949. By then Galvez was suffering from cancer and died a few months later at the age of 76.