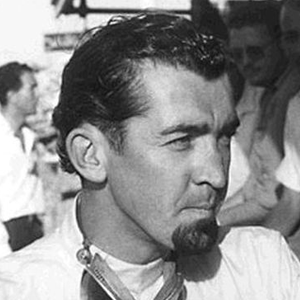 With his father 'Pop' a noted Formula 3 racer in his own right, it was no surprise when Stuart followed in his footsteps and from 1951 he was one of the formula's leading exponents. He scored notible wins in the wet at Silverstone in 1952, he took three wins at Orleans, France between 1953 and 1955 and had other international success in Italian races winning at as Senigallia and Teramo. He spent five seasons racing the Bears-Cooper in this cut-and-thrust environment before Rodney Clarke of Connaught gave him a chance to race at Brands Hatch in October 1956 finishing an impressive second behind Archie Scott-Brown’s sister car.

Racing for the works Connaught team, he started 1957 with a win in the Glover Trophy beating the likes of Jack Brabham, Stirling Moss and Tony Brooks. He ran second in the Naples GP befopre a front hub failed on lap 44. However Connaught were in trouble and running out of money. At Monaco he finished 4th but 3 laps down on the winner, Juan Manuel Fangio. It wasn't enough to save the little team from Send in Surrey and Connaught. Ferrari stepped in and offered Stuart a sports car drive at Le Mans co-driving with Martino Severi. Together they brought the Ferrari 315 S home in fifth place.

The next round after the Indy 500, which was a round of the World Championship at that time, was the French Grand Prix and Lewis-Evans was now driving for Tony Vandervell's  Vanwall team. The 1957 Vanwall was fast but fragile. His best finish was a 2nd at that year's non-championship Moroccan Grand Prix. He took an impressive pole position for the final round of the Championship, the Italian Grand Prix, but then had to retire on lap 49 with engine problems.

Although a slight, frail figure, Lewis-Evans embarked on a daunting racing programme in 1958, competing successfully in Formula 2 for BRP and in sports cars for Aston Martin, in addition to driving for Vanwall in Grands Prix. He played a crucial part in gaining the constructors' championship for the team but, in what should have been a glorious finale to the year at the dusty Ain-Diab circuit in Morocco, Lewis-Evans' Vanwall VW57 crashed in flames after its engine seized. Stuart got out with his overalls alight but, in his confusion, had run in the opposite direction to where help was waiting. Suffering from terrible burns, Tony Vandervell arranged to fly him back to England for expert attention, however he succumbed some six days later in East Grinstead Hospital.