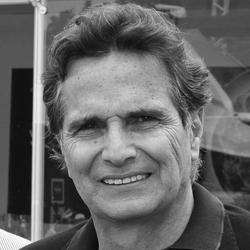 Nelson Piquet Souto Maior, more commonly known as Nelson Piquet, is a Brazilian racing driver who was Formula One world champion in 1981, 1983, and 1987. He is one of the few men to win at least three world championships in the history of Formula One (the others being Juan Manuel Fangio, Jack Brabham, Jackie Stewart, Niki Lauda, Alain Prost, Ayrton Senna and Michael Schumacher).

Piquet, born in Rio de Janeiro, Brazil, was the son of a Brazilian government minister who did not approve of his racing career, and for this reason he was forced to use his mother's maiden name Piquet (of French origin and pronounced as "Pee-Kay") mispelt as Piket to hide his identity.

After succeeding in Brazilian go-karting ('71 and '72 national champion) and local super-V 1976 championship, he arrived in european automobilism being considered a prodigy in British Formula 3 during the 1978 season when he broke Jackie Stewart's record of most wins in a season, and his promotion to Formula One heralded one of the great careers in the sport. A proof of Piquet's unique talent is that since 1980 he and the seven-time champion Michael Schumacher are the only two drivers between 1980 and 2000 to have won world titles racing for teams other than McLaren and Williams - undoubtedly the two reigning forces in those decades. Together with the Brabham team, including team boss Bernie Ecclestone and chief designer Gordon Murray, he became a consistent challenger for the world title, and was the first driver to win a title with a turbo engine in 1983. In 1986 Piquet moved to Williams, and in 1987 he became the first driver to lead the Honda engine to a driver's world title.

A shift in 1986 to the Williams team saw Piquet in direct competition with one of his fiercest rivals, Nigel Mansell. Both had highly strung characters and delicate temperaments. Two top drivers in the same team was a recipe for fireworks - and sure enough Mansell and Piquet went head to head for the title. Though the two drove the best cars on the grid, their rivalry caused each to deprive the other of points, allowing Alain Prost to steal one of the most fiercely disputed championships in F1 ever. Piquet made amends in 1987, using political maneuvering and technical skill to gain the upper hand. Despite winning fewer races than Mansell, in 1987 Piquet emerged as world champion. When Piquet followed the dominant Honda engines to a stagnating Lotus team in 1988, his career took a nose dive. He began to lose his reputation when he had no wins in 1988 and even failed to qualify on occasion in 1989. He resorted to using the media to attack his rivals and gained a reputation as an outspoken "loose cannon." However, a payment-by-results deal with Benetton saw Piquet return to top form in 1990, with two wins, followed by the final win of his F1 career at Montreal in 1991 - at the expense of long time rival Mansell.

Known as a practical joker, Piquet lived a stereotypically playboy racing driver lifestyle, earning and losing and earning again a series of small fortunes in his business dealings. One of the great characters of 1980s F1, he tried his hand at the Indianapolis 500 in 1992, but crashed during qualifying and was badly injured. He returned in 1993 and started in 13th position, but finished in 32nd, after engine problems allowed him to complete only 38 laps. He remains a competitive driver in sports car racing, albeit more for fun than with serious intent.

Since 2000, he has supported the career of his son, Nelson Angelo "Nelsinho" Piquet, who is a leading British F3 driver has been pegged by the F1 media as a future star.

In January 20th, 2006, Nelson Piquet won the 50th edition of Mil Milhas Brasileiras (Brazilian 1000 miles), at Interlagos racing track. He drove an Aston Martin DBR9 alongside his son, Nelsinho, and drivers Christophe Bouchut and Helio Castroneves. At the end of the race, an exhausted Piquet was quoted saying to a friend he would “never sit on a cockpit again”.