Sports car driver from Italy who mainly raced for Brun motorsport in IMSA and the WEC. He finished on the podium a number of times including second at Daytona in the 24 hour race in 1987 and two third place finishes at Sebring in 1991 and 1992. 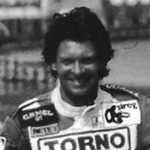 Massimo Sigala was born in Italy. He started racing in the late 1970's and first appeared on the Interantional scene in 1980 participating in the BMW Procar Championship.

By 1983 he was driving in the World Endurance Championship driving the Sivama Lancia LC1 with Oscar Larrauri and Diulio Truffo.

Sigala started 1985 driving in the IMSA series in the USA driving with Gianpiero Moretti and Jim Trueman in Moretti's Momo Alba AR3 Ford. He returned to Europe at the start of the WEC driving once more with Oscar Larrauri in the Brun Motorsport Porsche 956. the highligh of the season was a second in the 1000 km Hockenheim. He also had a 6th at Monza and a 5th at Selangor where he was joined by Frank Jelinski for the race.

1986 saw another season of IMSA and WEC with a third in the 1000km race at Monza sharing the Brun Motorsport Porsche 956 with the boss, Walter Brun, the only result of note.

He started 1987 in the 'States driving a Brun Motorsports Porsche 962 with Oscar Larrauri and Gianfranco Brancatelli in the Daytona 24 hour race. A great team efforrt saw them take a well deserved podium, finish second. A 5th in the 3 hour race in Miami with Brancatelli was followed by dissapointment in West Palm Beach when the car went out on lap 6 before he got to drive. In Europe with Brancatelli, they finished 6th at Jarama and Jerez, followed by a 5th at Monza all in a Brun Porsche 962C.

He continued to race in America and Europe posting regular top ten finishes but never acually winning. In 1988 he came 3rd at Monza with Larrauri and at Sebring he finished on the podium a number of times: 4th in 1989 with Momo/Gebhardt Racing, 3rd in 1991 with Joest Racing (2nd GTP) and 3rd in 1992.

For 1993, Nissan withdrew from GTP racing and asked Gianpiero Moretti to run the Nissan NPT90. At Daytona Massimo drove the car with Derek Bell, John Paul Jr and Moretti himself. The race was quite encouraging as they battled for victory until just two hours from the finish the engine quit, leaving them a disappointing sixth overall. In Miami the NPTI 90-03 went out on lap 5 with gearbox problems. At Laguna Seca he drove with Derek Bell and they brough the car home in 4th place.

1994 and 1995 he raced a Ferrari 333SP taking 8th place (2nd in class) with Fabrizio Barbazza, Gianfranco Brancatelli and Elton Julian at Daytona in 1995. After 1995 Massimo switched his involvement to team management. he raced at Le MAns a number of times with a best finish of 7th in 1988 with Jésus Pareja and Uwe Schäfer in a Porsche 962C.