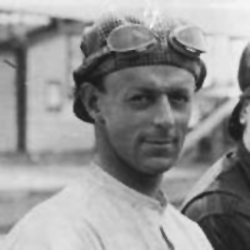 Noel van Raalte was a wealthy and influential playboy and British Peer. He was the owner of the first production Bentley ever made. His family's wealth allowed Noel to indulge in his passion for fast cars. He raced in the Indy 500 in 1915 finishing 10th. Noel van Raalte died 82 years ago, he was 52

A wealthy and influential playboy, he later lived in Bursledon, Hampshire, England. His family owned Brownsea Island during Noel's racing days & the family's wealth allowed Noel to indulge in his passion for fast cars.

During a fishing holiday in May 1907 at Knocklofty in Ireland, his father, Charles van Raalte, and his mother met Baden-Powell the founder of the Boy Scout movement. They got on very well and invited him to visit them in their London home or at their castle on the 500-acre Brownsea Island in Poole Harbour, Dorset. It was on the island that the very first Scout Camp was established and Noel would often visit as a child.

In 1910, when Noel was an undergraduate at Cambridge, he challenged william Rhodes-Moorhouse to a race throught the town. Rhodes-Moorhouse had a blue 90 hp Grand Prix Fiat called "Linda" while van Raalte had a bright red 140 hp Kaiserpreis Minerva. The loser was to pay any fines. The race took place early one Sunday morning from the Market Square to the station, a distance of about 1¼ to 1½ miles. Van Raalte won easy and at the subsequent court appearance the pair were fined £40. Rhodes-Moorhouse came in for some particularly hard critisism from the Bench, saying that he was a worthless and good-for-nothing young man. As an aside, just five years later, William Barnard Rhodes-Moorhouse became the first airman to be awarded the Victoria Cross!

In 1912 Noel went with Baden-Powell on his lecture tour of the USA and, later that year, he married Iris Graham. They divorced in 1920, she then married Sunbeam director Louis Coatalen in 1923.

In 1915 he somehow landed a works drive in a Sunbeam in the Indy 500. Under the nom de volant 'Percy Graham', van Raalte tried to qualify the Sunbeam originally intended for Chassagne. Unfortunately he failed and Barney Oldfield took over. He succeeded in putting the car on the grid in 14th spot but stood down for the race to permit Van Raalte to drive. He came home in 10th place. After the race he bought one of the  6.1-liter Sunbeams (Toodless IV) in which Guyot and Crossman finished fourth. van Raalte then drove the Sunbeam in some club races at Brooklands.

On 21 September 1922, Noel took delivery of the first production Bentley to leave the factory.

He died after a long illness.