Jean Gaupillat was a French racing driver who spent most of his career racing Bugatti. He was killed in the second heat of the Grand Prix de Dieppe in 1934 when his Bugatti hit a tree. Jean Gaupillat was born in Paris, France. He was the only boy in a family of six children. His father, Marcel, was in business with his brother manufacturing detonators and catridges. Marcel Gaupillat et Compagnie flourished during WWI and the factory continued to do well after the war, making detonators for the mines in the Ruhr valley occupied by France at the time. However when the land was returned to Germany the contracts were not renewed and the factory diversified into other areas. In 1928, Jean started his own business: the "société Etampage de Précision Gaupillat", and the following year transfered manufacturing into a part of the factory at Bas-Meudon which he rented from his father.

Jean started racing in cyclecars in the late 1920s driving a BNC. The BNC (Bollack, Netter and Compagnie) was one of the top cyclecars. Gaupillat's was powered by the optional SCAP four cylinder 892 cc side valve engine. He entered a numeber of races in 1927 without much success. He was the 4th cyclecar home in the Grand Prix de Boulogne but he was not classified as he only completed 9 of the 12 laps.

He appeared the next year in a Bugatti, the marque he drove for the rest of his career. He entered a Type 37 in the Grand Prix de Boulogne but retired after just 3 laps with a brocken axle. He continued to campaing the T37 in 1929 winning the 1500cc voiturette class at the Grand Prix de Dieppe. He also took part in the 12 hour handicap race at Lasarte-St. Sébastien, the Grand Prix du Guipozcoa. Driving with Sabipa, otherwise know as Louis Charavel, they finished third.

Equiped with a T37A, 1930 was not a great year with only a second in the voiturette class at the II Grand Prix de Dieppe of any note.

Ernest Friderich, Bugatti's concessionaire on the Riviera, often helped youngsters and in 1931 he made available a pair of Bugatti T51s for Jean-Pierre Wimille and Gaupillat. They raced together in the three 10 hour races (Italy, France and Belgium) that made up the European Drivers Championship. In Italy they finished 4th but in France at the XXV Grand Prix de l'A.C.F. at Montlhéry they went out near the end of the race with suspension failure. At Spa-Francorchamps in the III Grand Prix de Belgique they crossed the line in 7th. They finished 9th overall in the final classification.

In other races that year Gaupillat came second in the 1500 cc class in the II Circuit d'Esterel Plage at St. Raphael driving a Bugatti T37A. He came 4th in the voiturette class at the VII Grand Prix de la Marne in a Bugatti T35C. He teamed up with Wimille for the 4 hour Grand Prix de Dieppe but they crashed out after 35 laps with the T51 catching fire. At the Grand Prix du Comminges he came 6th and at the Grand Prix de la Baule he came 2nd behind "Williams", both races driving the T51 Bugatti. 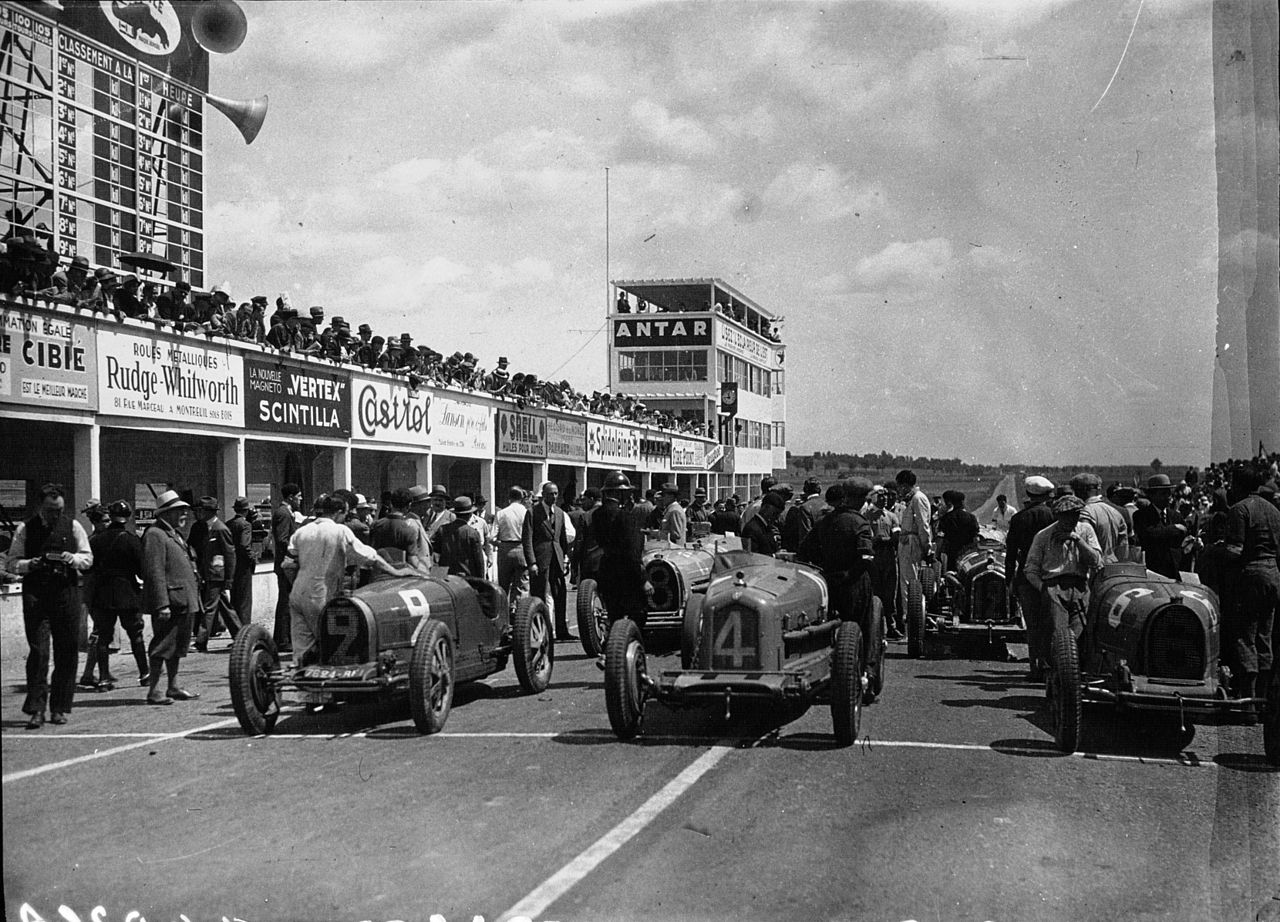 Starting grid of the Grand Prix de l'ACF in 1932: Max Fourny is on pole number 6 on the right, Philippe Étancelin in the center for Alfa Romeo and Jean Gaupillat on the left with his Bugatti.
Bibliothèque nationale de France

1933 started with the Grand Prix de Pau. It was snowing when the race started. Gaupillat was fifth and soon moved up to third. The snow was still falling hard untill lap 25 when it finally stopped. Gaupillat dropped back to fourth, then on lap 50 he was out with mechanical failure. At the Grand Prix de Tunisie he went out when his T51 lost its oil. Another DNF in the Grand Prix de Picardie, the race in which Guy Bouriat lost his life. The season continued with a succession of DNFs and DNAs. He raecd at le Mans that year with Count Stanislaus Czaykowski in a Supercharged T51A. They retired after 52 laps. Later that year, in the September, Czaykowski lost his life in an accident at Monza on a day when Giuseppe Campari and Baconin Borzacchini also died.

In June 1934, he drove his T51 to 8th place in the Eiffelrennen at the Nurburgring. Then the following month in the second heat of the Grand Prix de Dieppe, a non-championship voiturette race, his Bugatti hit a tree and he was killed.