Cazaux always drove Bugatti's. He was killed on his victory run at the 1935 Sézanne Hill Climb. 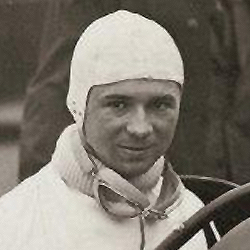 Cazaux was born in Biarritz, France. He was the head of the Ecurie Cazaux, with his partners Girod, Cesure and Roumani. He raced hillclimbs and speed trials, and he always drove Bugatti's.

1934 The Dieppe Grand Prix, one of two GP races held in France on that day, was run in two heats plus a final with the top five finishers from each heat. In his heat Cazaux was disqualified for receiving outside assistance. The heat was overshadowed by the accident that took the life of Jean Gaupillat when his Bugatti hit a tree.

In 1935 at the Grand Prix de Pau he finished 6th (3 laps down) in a Bugatti T51. On the 26th of May he won the Circuit d'Orleans however the race was marred by an accident. Before the GP class started the rain began to fall and the race distance was reduced to 20 laps. Cazaux took the lead followed by Comte George Raphaël Béthenod de Montbressieux otherwise know as Raph and Buffy (Bugatti). Buffy passed "Raph" for second place and tried to catch Cazaux. But on lap 7 Buffy overdid it in the rain and lost control of his Bugatti. The car bounced off a tree into the crowd, hitting 12 people, one of them later succumbed to the wounds. As the situation became chaotic with spectators on the track the race was stopped with the order at that time becoming the final results.

On June 16th 1935 he won the 1935 Sézanne Climb, with his Bugatti T35B. AUTOMOBIL-REVUE wrote on Friday, June 21, 1935: He mastered the course at an average of 140.620 km/h. A short time later, when he drove the course once more, so to speak as a 'lap of honor', his car swerved in a bend and ejected the pilot out of his seat. Consequently, the car itself tumbled over. Cezaux suffered such serious injuries that he died soon thereafter. Fortunately, there were no spectators at this particular spot and so it did not come to an even greater catastrophe.