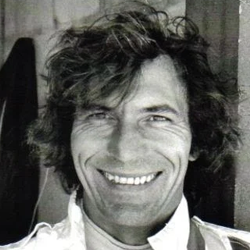 One of the greatest all-round drivers ever, Vic Elford started racing in a Mini in 1961, was the last British driver to win the Monte Carlo Rally and has raced at Le Mans, the Daytona 500 and Formula 1 Vic Elford died this year

Victor Henry Elford was born on June 10th 1935 in London, England. Vic lived in France for many years, then in Belgium where he met his wife Anita. Today, they live in South Florida.

At the age of thirteen his father took him to see the first post-war British Grand Prix at Silverstone. He decided there and then that he was going to be a racing driver.

Perhaps the greatest all-round driver ever, Vic Elford started racing in a Mini in 1961 and rallying in a DKW in 1962.

By 1967 he was doing both for the Porsche Factory Team!

Victories in the Geneva, Stuttgart-Lyon-Charbonnières and Tulip rallies coupled with podium finishes on Monte Carlo and the Tour de Corse, all in a 911, assured him of the European GT Rally Championship.

Podium finishes also abounded in this, his first season of circuit racing, winning the British championship in a 911 and his international debuts in Porsche 911R, 906 and 910 at Le Mans, Mugello, Reims and Nurburgring.

The season finished on a high note with "Le Marathon de la Route" at the Nurburgring. Driving a 911R Sportomatic, Vic (being the "rally driver" as his partners Hans Herrmann and Jochen Neerpasch put it) drove four consecutive 7 1/2 hour rain and fog filled nights around the combined Sud/NordSchleife track while they did the rest, to win this mind-boggling 84 hour event.

At the Targa Florio, despite starting the second lap of the ten lap, 720 km race more than 18 minutes behind the leading car, Vic and co-driver Umberto Maglioli came back to win by more than a minute. (Just a few months ago, when Vic was in Sicily for a Targa Florio reunion the locals were still recalling that exploit!) Porsche, in recognition of his efforts, dedicated their traditional victory poster not to the car, but to the driver. The only time a Porsche poster ever featured only the driver - not the car.

Drawing on the experience of all those hours at night on the Nurburgring the year before, Vic followed up with victory, the first of three, in the 1000kms of Nurburgring, associated with Jo Siffert in a 908 Coupe.

But 1968 was not yet finished! Vic made his Formula 1 debut in a Cooper at the French Grand Prix. With no testing and little practice, he started dead last... but it rained and Vic's acknowledged prowess as a "rainmaster" served him in good stead and he finished fourth overall!

1969 saw lots more podiums and he still continued to make history, being one of the first non-American drivers to do the Daytona 500 - finishing 11th - and then finishing 7th in the Monaco GP, thus becoming the only driver ever to have won the Monte Carlo Rally AND finished in the Monaco GP. In fact, although it is now more than thirty years ago, Vic Elford was the last British driver to win the Monte Carlo Rally!

In 1970 Vic Elford turned his attention to America, driving for Jim Hall's Chaparral team in TransAm (with a spectacular win in the rain at Watkins Glen) and CanAm (with sensational performances in the 2J "sucker" car).

By 1971 Vic had become one of the very few drivers to have won both the American Crown Jewels of endurance racing, the 24 hours of Daytona and the 12 hours of Sebring.

Vic Elford was one of the select few Porsche 917 and Ferrari 512 drivers hired by Steve McQueen to do the high speed close-up action driving for Steve's film "Le Mans".

In 1972, while driving for Alfa Romeo, Vic branched out into another extra-curricular activity - that of principal narrator for producer Michael Keyser's film "The Speed Merchants".

During the 24 hours of Le Mans, when a Ferrari crashed in front of him, Vic stopped in mid-race to extricate the driver from his burning car T.V. cameras caught the action and Vic was named Chevalier de l'Ordre National du Mérite by French President Georges Pompidou for his act of courage and heroism.

For the last few years Vic Elford has concentrated on writing, coaching, driving demonstrations, and attending corporate events as a keynote speaker.