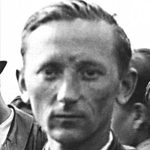 He started motor racing in the early 1950's in a 500cc Cooper F3 car, winning at Avus and Halle Saale in 1952 as well as finishing on the podium a number of times.

In 52 he won at Leipzig, Dresden (ahead of Kurt Ahrens Snr) and Halle-Saale. He finished the West German Championship in third place.

In 53 he again had wins at Leipzig, Dresden and Halle-Saale. He finished the West German Championship in second place.

He continued in F3 with limited success over the next few years with wins at Wismar in '56 and '59 and at Halle-Salle in '57.

At the Grand Prix de Pau in April 1962 he failed to qualify his Lotus-Borgward. He was 29 seconds off pole position held by Jim Clark. At Solitude a couple of weeks later he qualified 10th ahead of Jo Siffert but retired on the 5th lap with engine trouble. The car was not ready for the VIII Kannonloppet in August nor was it for the I Gran Premio del Mediterraneo at Enna-Pergusa a week later.

In 1963 at the XV Gran Premio di Roma in May he failed to qualify. His time of 1:45.8 was 16.4 seconds off pole. Jo Siffert was due to race a Lotus-BRM 24 but was refused a permit to race. The non championship event wass won by Bob Anderson in a Lola-Climax T4 (BRGP43).

His next race was another non-championship affair, the XIII Großer Preis der Solitude in late July. Having succeded in qualifying (24th) he failed to complete a lap due to mechanical failure.

A week later he was at the 20 lap IX Kanonloppet. He qualified 15th and finished the first heat in 14th. 5 laps down on the winner Jim Clark in a Lotus-Climax 25 (R3). The race had a number of F1 starts including Jack Brabham, Denny Hulme, Jo Bonnier, Masten Gregory, Dan Gurney and Chris Amon. In the second heat he went out after 7 laps with fuel injection problems.

His single World Championsip Formula One entry was at the 1963 German Grand Prix where he failed to qualify his Borgward-engined BKL Lotus by a considerable margin.