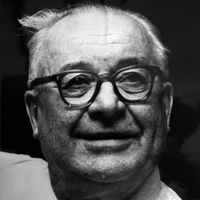 English industrialist, motor racing financier, and founder of the Vanwall Formula One racing team. Guy Anthony Vandervell died 55 years ago, he was 69

Tony Vandervell had an obsession: to beat the "bloody red cars".

Guy Anthony "Tony" Vandervell came from a wealthy background, his father having made a considerable amount of money by founding the CAV electrical company. This was sold to Lucas in 1925.

In the 1920s Tony raced Norton motorcycles and Talbot and Wolseley cars at Brooklands but then gave up the sport to concentrate on making his fortune from a closed bearing business which he called Vandervell Products.

The young Tony devoted himself to the study of metals and their use in bearings; he achieved excellent results and in 1934, patented the "thin wall" bearing.

After the Second World War, Vandervell, whose company had by then grown considerably, was invited to join the BRM project. Vandervell accepted and placed at the disposal of the team his factory and its research and development department. Because of difficulties setting up the BRM project, the technicians asked for a proven racing car to try out their new solutions on.

Vandervell acquired a Ferrari provided by Maranello in exchange from a certain number of bearings. To study its behaviour the car, painted in green was entered in the British Grand Prix in 1949 as the "Thin Wall Special".

At the end of the year, Vandervell left the project and decided to build his own cars.

He bought second Ferrari thus, but it was a failure. As soon as he found out that Ferrari were preparing a 12-cylinder engine, Vandervell acquired one and put it in the old Thin Wall Special. He entered it into the International Trophy in May 1952, it was the first official appearance of the new engine Vl2 Ferrari and, in spite of its running in an unsuited chassis, the power plant showed excellent qualities: The Thin Wall finished second behind the Alfetta of Fangio. During the season, the car won various races, but his interest switched from the powerful Ferrari to the small and very nimble Cooper F3, which were powered by a Norton motorcycle engine.

The ThinWall (the two terms were joined together into a single word) Special however continued to run and, in 1953, won races driven by Farina and Hawthorn. Its engine was still the V12, which classified it in Formula Libre. In 1954, Vandervell decided to build an entirely new car. Thus was born first Vanwall (A combination of Vandervell and ThinWall) a new chassis was commissioned from the Cooper Car Company and was designed by Owen Maddock, suspension derived from Ferrari and an inline four cylinder, 2 litre engine. The cylinder block was aluminium while the cylinder head had twin camshafts. The engine was designed by Norton engineer Leo Kuzmicki, under the guidance of the company's chief development engineer Joe Craig, and was essentially four Norton 500cc engines combined into one 2-liter unit. Vandervell was able to use Norton because his father C A Vandervell was chairman of Norton at the time. The brakes were disc and the fuel tanks were made of a flexible matter (Flexilite).

The car was characterized by the external radiator cap. The Vanwall was initially handicapped by its cubic capacity, 2 litres compared with the 2500 Cm3 of the other F1 cars. But by the middle of the season, the engine size was increased to 2.3 L and then to 2.5 L.

The first car appeared in the hands of Alan Brown at the International Trophy in May 1954 but was then not seen again in Formula 1 until the British GP where it was driven by Peter Collins. It registered its first finish at the Italian GP in seventh place and a couple of weeks later Collins finished second to Stirling Moss's Maserati 250F in the Goodwood Trophy. In October Mike Hawthorn was second to Moss at Aintree.

In 1956, Vandervell called on Colin Chapman to build a new frame, while Frank Costin drew a new aerodynamic body. The engine, still with four cylinders and two camshafts was equipped with Bosch fuel injection, similar to that which Mercedes were using in 1954 and 1955. The power was 280 CH at 7400 rpm by using an alcohol fuel, while using commercial petrol; the power reached 265 CH for the same revs.

The resulting cars were raced for the first time at the International Trophy by Moss (a contracted Maserati driver) and Schell. Moss won the race. Thereafter Maurice Trintignant took over the drive. The cars looked promising but failed to deliver any other major results that year.

In 1957, Moss won three Grand Prix (Great Britain, Pescara and Italy) and finished the season second behind Fangio. The following year, the same cars that in 1957 were back with only small modifications. Moss won three more Grand Prix (Holland, Portugal and Morocco) and was again second, behind Hawthorn. But, thanks to the other victories by Tony Brooks (at the Grand Prix of Belgium, Germany and Italy) and the team's third driver Stuart Lewis-Evans finishing second in the Moroccan GP, Vanwall won the Manufacturers Trophy (in its first year). Vandervell's triumph was tainted however at the final race when Lewis-Evans suffered serious burns from which he later died.

At the end of the year Vandervell announced that the team would not be continuing due to his ill-health. One new car was built for the 1959 season and was raced on occasion by Tony Brooks that year and in 1960 but without success while Lotus tested a Vanwall-engined car. A rear-engined Vanwall was built for the Intercontinental Formula in 1962 and driven by John Surtees but the series was a flop and the Vanwall name disappeared from motor racing.

Tony Vandervell, who had withdrawn from the active life for some time, died in 1967.