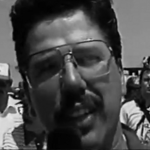 From a poor background in South El Monte, California, Garcia made it into the ranks of NASCAR professionals though sheer hard work and determination.

Ruben Garcia from South El Monte, California came from a very poor background. He had a strong desire to race but financially found it virtually impossible. However through dogged determination and hard work he eventually started racing.

He started out in the Winston West Series racing from 1979 to 1988 and taking two wins both in 1985 and both at the Mesa Marin Raceway in Bakersfield, California. He also completed in the NASCAR Cup Series from 1984 to 1988.

In 1988 he travelled with the NASCAR Circus to race in the Goodyear NASCAR 500 at the Calder Park Thunderdome, Melbourne, driving the Van Nuys Performance Imports Chevrolet, moving up from 23nd to finish 13th.

He is best remembered for starting an comprehensive demolition project in the Budweiser 400 at the Riverside International Raceway on June 12, 1988, when he came off turn 9 and something broke he got on the dirt and found a very large opening in the concrete retaining barrier, destroyed a tire wall and, with undiminished speed, a steel guardrail, a chainlink fence and a brick wall with a set of barrels behind it which finally brought him to a standstill. Fortunately just yards short of a spectator enclosure.

He wasn't injured, but did not race in the Winston West again. Riverside Raceway closed the next year.