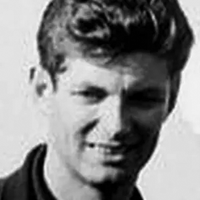 Tommy Spychigerwas a Swiss racing driver who started racing in 1950 with an Osca 1100S. He competed in two Formula Junior seasons before returning to sports car racing and hill climbs. He crashed fatally at Monza when the brakes failed on the Ferrari 365P2 he was driving. Tommy Spychiger died 57 years ago, he was 31 , He would have been 88.

Though physically handicapped in his right hand, Tommy Spychiger, whose family ran the Galleria restaurant and bar in Lugano, began his motorsport career in 1950 with an Osca 1100S. In 1959 and 1960 he competed in two Formula Junior seasons with a Cooper T52 and then returned to sports car racing.

He became a works driver at Abarth and competed for the Italian racing team in hill climbs and sports car races. In 1960 he made his debut at the 24 Hours of Le Mans, where he competed twice in total. Both times he retired due to technical defects.

In 1960 he had a serious accident at the Gaisberg race in which he broke an elbow. Just a few minutes earlier, the German racing driver Walter Häderle had a fatal accident at the same point.

In 1965 he started for the Scuderia Filipinetti in the sports car world championship. At the 1000 km race in Monza in 1965 , after the first refueling stop, he took over the Ferrari 365P2 from his compatriot Herbert Müller. On his first fast lap he drove straight ahead in the Parabolica with no apparent braking effect. The car overturned over an earth wall and burned out completely in the forest behind the racetrack. Spychiger succumbed to his serious injuries at the scene of the accident.