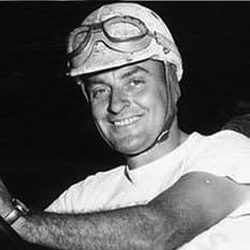 Potsy Goacher raced mainly sprint, midget and dirt cars. He entered the Indianapolis 500 four times, two as reserve driver and two as the main driver. Failing to qualify. He holds the unenviable record for the most American Championship Car races entered but not started with 10 attempts.

Potsy Goacher's real name was Paul. He was born in Summitville, Indiana. His nickname came from a childhood obsession with stop signs. The family reversed the letters and Paul became Potsy!

Potsy entered four Indianapolis 500 races, two as reserve driver and two as the main driver. His first Indy 500 in 1950, as a reserve, saw him pass the rookie test but not drive in the race. In 1952 he made no attempts to qualify. He came close to qualifying in 1953 with a Pankratz-Offy but was bumped out on the last few hours of qualifying and in 1954 he returned with a a Moore Offy but he crashed on the backstretch during practice, sustaining injuries that kept him from making any further attempts. With that he lost a little bit of enthusiasm and made no further attempts to enter the Indy 500.

He holds the unenviable record for the most American Championship Car races entered but not started, with 10.

He worked for Delco in Anderson, Indiana as a tool and die maker but was also earned a little extra as a musician playing the saxophone and clarinet in local nightclubs.

In later life, Goacher ran a Volkswagen repair shop and invented a leather shoulder harness for midget race drivers, which was used by the like of Eddie Sachs.

Potsy died of a stroke in his sleep. Goacher's grandsons have followed his lead with one playing the saxophone and the other raced motorcycles. We also understand that his brothers did a bit of racing as well.