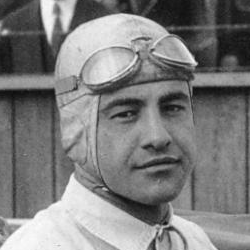 Peter DePaolo as remembered by the late Dick Ralstein:

When ever you introduced Peter DePaolo to strangers you always included, "winner of the Indianapolis 500, and the first driver to average more than 100 mph."

Invariably, the questions would begin, how, why, what, where, when, and Peter was off to the races, in his favorite mood --- telling a story.

You see Fred Duesenberg was Peter's car owner for the 1925 race and Fred commanded his race team like a general commands his army. When Peter pitted his Duesenberg, just past the half way point while leading easily, Fred noticed his hands were badly blistered and ordered our hero out of the car and Norm Batten in as a relief driver.

Peter was almost heart broken when Batten almost stalled the Duesenberg pulling out of the pits. He was taken to the infield care center where his damaged hands were repaired. Twenty-one laps later Norm was out of the car and Peter was in, fighting to get back to the front from fifth place.

Oh it was a great victory, his winning speed of 101.270 was a record that stood for seven years. In his third try at Indianapolis he had beaten such standouts as Harry Hartz, Tommy Milton and, most of all, uncle Ralph DePalma. But, in Peter's eyes, it wasn't his "Greatest Race" because Fred Duesenberg had taken him out of the cockpit for those 21 laps

Peter told one and all his greatest race was at the Fulford-by-the-Sea 1 1/4 mile board track, near Miami, Florida, Feb 26, 1926. The track was a brand new marvel built by Carl Fisher, builder of the Indianapolis Motor Speedway, and managed by Ray Harroun, winner of the first Indianapolis 500.

Fisher's new creation had turns that were banked an incredible 50 degrees, you had to run at least 110 mph to even stay on the track.

Eighteen cars entered the inaugural event, 14 Millers and four Duesenbergs, Peter was still driving for, and speaking to, Duesenberg. The race was scheduled for 300 miles instead of the normal 250 miles for a board track race.

When practice opened it didn't take long for all hell to break loose. Rookie Ralph Hepburn blistered the high banks opening day with an unheard of 141.19 mph. Four days later Tommy Milton upped the ante to 142.93, don't forget this was 1926.

Peter put his brain in motion and did some serious thinking, fast speed, longer race, higher humidity and temperatures. Quietly Mr. DePaolo installed a bigger fuel tank and a larger radiator in the Duesenberg and started figuring just what the tires would stand in the way of stress. 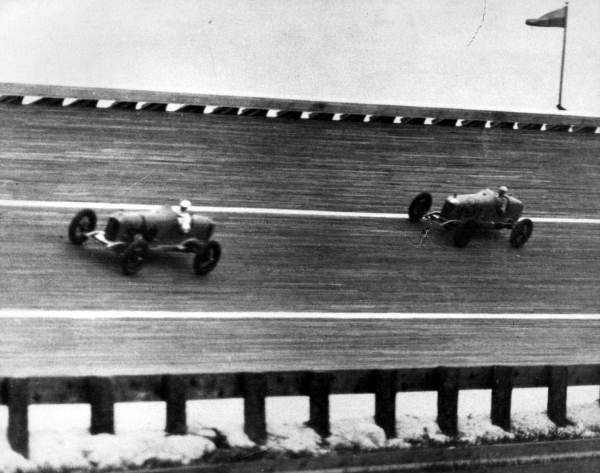 When his plan was complete he sat back and watched the others go for broke.

Came race day and away they went, Hepburn blasted by Milton into the lead and, almost immediately into the pits with his tires shredded. Dave Lewis led, then Leon Durray, then Earl DeVore. All would take the lead then be forced to stop for tires, or fuel, or water.

Peter was content to run in fourth or fifth place, wherever he felt the Duesenberg was comfortable.

At about the 225 mile mark Peter was given the "go" sign from the pits, tires, fuel and water were good to the finish.

About the 250 mile mark Peter passed DeVore to take the lead. Devore, Harry Hartz and Bob MCDonogh made valiant efforts but Mr. DePaolo was not to be caught on this day, his strategy had paid off. He drove the 300 miles without a stop and into victory circle.

His "greatest gamble" paid off, he had won his "Greatest Race".

There were big plans for Fulford-by-the-Sea, the 20,000 people who had jammed the grandstands had paid as much as $15.00 for box seats. Fisher's new baby was a big success but ---

But Mother Nature had other ideas. On Sept. 22, 1926 the strongest hurricane to hit the Miami area, up to that time, lumbered slowly across South Florida, and FulFord-by-the-Sea. Instruments to measure winds of 150 mph were completely blown away.

When the storm passed, Carl Fisher's new speedway lay in ruins. More than 1,000,000 board feet of lumber, from the demolished speedway, were used to rebuild homes and businesses destroyed by the hurricane.