A member of the Monkey Stable and a works Aston Martin driver. Griffith was a very useful driver however after a bad crash in the 1954 12 Heures de Hyères he retired to concentrate on his business. 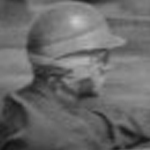 In 1951 Jim Mayers, a wealthy amateur driver who was an heir to the family that controlled the Polaroid company, teamed up with Pat Griffith, whose family ran a gasket business, and ordered two new MG Specials from Harry Lester. Lester established a reputation as the man who knew the best way to exploit the potential of production MGs.

Mayers ran in Club events at the beginning of the year, but Griffith’s experience was limited to one meeting at Goodwood and a few laps at Castle Combe. They both entered the British Empire Trophy race at the Douglas circuit on the Isle of Man on the 18th June. This was a 136 mile handicap event for sports cars. The handicap gave the 1500cc Lesters three credit laps over the cars running in the 1501-3000cc class. The two-litre Frazer Nash entries were tipped as the likely winners, more than able to make up the ground. Griffith, however, was lapping so swiftly that even Moss, in Sid Greene’s Frazer Nash, could not catch him. Two laps from the finish, the Lester ran out of oil and its engine seized. Moss won the race. As he accepted his prize, he commented, ‘The only thing I can say is how sorry I am for Pat Griffith, for I could never have caught him had he not had trouble.’ It was as a result of this drive that Griffith came to the notice of David Brown and joined the works Aston Martin team for 1952.

For 1952 Mayers and Griffith were joined by HRG driver Gerry Ruddock, who took delivery of a new Lester in March, 1952. The three formed themselves into a team called the Monkey Stable. They asked Peter Avern to become manager as a spare time job. The season was fairly successful, and in September, 1952, he left his job in the textile trade and after a short spell with Kieft Cars at Farnborough, took on the job of managing the Monkey Stable full time.

In the British Empire Trophy, again held as a handicap sports car race on 29th May, the Monkey Stable Lesters were driven by Mayers, Griffith and Ruddock. The runners in the 1500cc class were given four credit laps of the 3.8mile Douglas circuit. The 1501-3000cc cars received one credit lap and cars over 3000cc, such as the Jaguars, started on scratch. The strongest opposition to the Lesters came from Motor Cycle World Champion Geoff Duke with a works three-litre Aston Martin DB3. Mayers retired after a piston failure, but Griffith and Ruddock set a cracking pace and although Duke was gradually catching the Lesters, he dropped out with a broken crank-shaft. Griffith, meanwhile, collided with a dog that had decided to cross the road at the wrong time. After Harry Lester had checked the regulations with the organisers, the Lester was called in for a brief stop for the damaged left front wing to be removed. It seems that the dog survived the incident. At the finish Griffith had averaged 64.20mph and was 21sec ahead of Ruddock, who finished the race with the inlet manifold about to fall off. Mike Hawthorn (Frazer NashMille Miglia) took third place.

On 10th July Griffith and the other members of the Monkey Stable drove their Lesters in the Jersey Road Race on the St Helier road circuit. This was a sports car event with two 32 mile heats and a 64 mile final. There were no class results in the heats, but in the final Mayers won the 1500cc class at 78.62mph and Griffith snatched second place in class from Cliff Davis (Cooper-MG) on the last lap. The Daily Mail sponsored a major meeting at the three mile Boreham airfield circuit in Essexon 2nd August. The day started with a 100 mile sports car race for cars up to 2000cc. Again the Lesters were very successful in the 1500cc class. Mayers won the class at 79.39mph, Griffith took a class third, hot on the exhaust of Davis.

Later in August, Pat Griffith was had his second drive with the works Aston Martin team and shared the winning DB3 with Peter Collins in the Goodwood 9 hour race.

For 1953 Pat and the others wanted faster cars to tackle long distance races on the European mainland. After had long discussions with Harry Lester, they decided he could not supply what they wanted. So they turned to Cyril Kieft’s company in Derry Street, Wolverhampton. Kieft was developing a sports-racing car designed by Gordon Bedson. Four of these cars were ordered by the Monkey Stable, but it is believed that only three were delivered. The Kieft-MGs never came up to expectations, but a few successes were gained during the year. The new cars made their debut in the production car race at the International Trophy meeting at Silverstone in May. Mayers and Griffith took second and third places in the 1500cc class, but they were slow and well behind Davis with the Cooper-MG. Griffith drove another good race in the British Empire Trophy on the Isle of Man on 18th June. The 1500cc heat was won by the persistent Cliff Davis with his Cooper-MG, but Mayers and Griffith finished second and third. In the final Davis’s Cooper shed a wheel Griffith went on to win the 1500cc class from Lionel Leonard (Leonard-MG).

Mayers and Griffith entered the Nürburgring 1000km race on the 30th August and although the Kiefts were promising in practice, it didn't carry through to the race. Mayers and Griffith came fifth in their class at 59.9mph, compared with the 70.4mph of the Borgward, the class winner.

Pat Griffith drove rarely for the team in 1953 because he found the commitments of his job and driving for the Aston Martin team kept him fully occuptied. He was still co-driver to Peter Collins and during the year they finished second in the Goodwood Nine Hours race and won the Tourist Trophy.

In 1954 Collins and Griffith drove the works DB3S/4 to 3rd place in the Buenos Aires 1000 Kms. they retired Sebring 12 Hours and crashed in the Mille Miglia. Pat was already planning to retire from racing at the end of 1954 and there was no turning back for him after the 1954 Hyères 12 Hours race. He co-drove Graham Whitehead’s Aston Martin DB3S, but was forced off the road by another competitor and thrown out of the car. Because of his injuries Griffith missed Le Mans and appeared only once more for the David Brown team, in September at the Tourist Trophy. Collins retired their DB3S early in this race with final drive failure. In later years Griffith was honest enough to admit that after his Hyères accident he became apprehensive about going too fast. "...I knew then that I wasn’t going to be much good for any more motor racing".

Pat Griffith’s family sold their business, Cooper’s Mechanical Joints, to Turner and Newall. Pat joined the company and ultimately became chairman. He died of cancer in 1980.