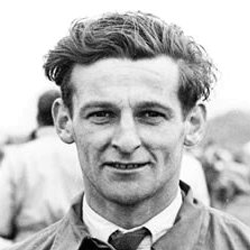 Ninian Sanderson was a straight-talking car dealer from Glasgow. By all accounts, he was not the easiest of men to get along with. He would not suffer any sort of second-rate work, either in his car, or in his business.

However he is best remembered for his success at Le Mans in 1956 with the Ecurie Ecosse Jaguar, which he shared with Ron Flockhart, beating the Aston Martin of Stirling Moss and Peter Collins.

He was also renowned for his practical jokes. Once as Ron Flockhart was preparing to leave the Aintree pit lane for a qualifying lap in the Ecurie Ecosse D-type Jaguar. Without warning, an almighty bang emitted from the back of the car. Flockhart was seen jumping out and running at least 50 yards from what he thought must be a fuel fire.

Behind in the pit lane were the mechanics creased with laughter, and Ninian looking smug, brushing away the evidence of the firecracker that he had just stuffed up the exhaust of the Jaguar.

Another time on an early commercial passenger flight, Ninian, a WWII fighter veteran, found himself sitting next to a nervous man who confessed to being on his first ever flight. Ninian reassured the man that he himself had made many flights, and could vouch for the fact that the airline took no chances with safety. At this point, he pulled his crash helmet out of his hand baggage, and strapped it on. The nervous passenger just stared. Eventually, Ninian turned to him, and said "Oh, didn't they give you your one? The pilot did say it was going to be a bit rough." The first time flyer was last seen hammering on the connecting door to the flight deck, demanding a crash helmet. Ninian discreetly moved to another seat.

He finally succumbed to cancer in 1985.