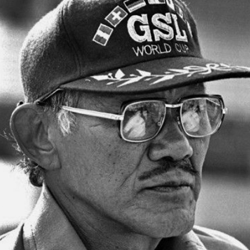 Teddy Yip was an Indonesian-Dutch businessman who was instrumental in developing Macau as a tourist destination and who raced in the late '50s and was a Formula One team owner in the 1970s. Teddy Yip died 19 years ago, he was 90

Teddy Yip, a Dutch national, was a Formula 1 team owner in the 1970s. He was born in the Dutch colony of Sumatra in 1907. Yip was sent to Holland to study but later went into business. He moved to Hong Kong in the 1940s and began to build up his business empire which included travel agencies, hotels, casinos and trading companies. Yip spoke many languages including six Chinese dialects, Dutch, English, French, German, Malay and Thai, which helped him expand his businesses into property and finance.

Yip started racing for fun in the 1950s at the wheel of a Jaguar XK120. In 1962 he and several partners (one of them was his own brother-in-law, Stanley Ho) formed the Sociedade de Turismo e Diversoes de Macau with a monopoly to run all casino operations and many other leisure activities in Macau, including the local lotteries, ferries and hotels. The company turned Macau into a major tourist center. Yip was the force behind the Macau Grand Prix which is today one of the biggest motor racing events in the world outside Formula 1.

In the early 1970s Yip met Sid Taylor and agreed to sponsor Vern Schuppan in Formula 5000. This led to Yip backing Schuppan in Formula 1 with Team Ensign in 1974. There followed further involvement in America with Schuppan and then support of Alan Jones in the US Formula 5000 series in 1976. That year he established Theodore Racing. It was run by Taylor and entered an Ensign for Patrick Tambay in F1. After a difficult year in 1977, Yip commissioned Ron Tauranac to build him a Formula 1 car. The car was difficult and Eddie Cheever failed to qualify in both Brazil and Argentina but then Keke Rosberg took over and won the International Trophy at Silverstone in the wet, although he qualified for only one GP in South Africa. The car was abandoned in the mid-season. In America, Yip supported Dan Gurney's Eagle team.

In 1979, Yip helped to fund Ensign but the car was not a success. The car was driven by Derek Daly, Patrick Gaillard, and Marc Surer but there were no points scored. At the end of the year Teddy also funded a British F1 programme with a Wolf WR6 for David Kennedy and helped Desiree Wilson to become the first woman to win a Formula 1 race - albeit a British F1 event.

Kennedy moved to Shadow in 1980 but the team was by then on its last legs, and in the mid-summer, Yip decided to rethink his involvement in racing and ended most of his other activities in order to concentrate on F1.

With Sid Taylor and Julian Randles he established Theodore Racing Ltd. and recruited Tony Southgate and team manager Jo Ramirez. The new car was dubbed the TY01 and was driven by Tambay at the start of 1981. In the mid-season Tambay was lured away by Ligier and Yip gave the drive Marc Surer. The same car was developed in 1982 and it became obvious that small teams could not easily survive in the turbo era. Yip merged Theodore with Ensign and used the Nigel Bennett-designed Ensign N183 design as a Theodore. The team hired Johnny Cecotto and Roberto Guerrero but at the end of that season the team shut down and Mo Nunn moved to America, where he enjoyed great success as a race engineer through the 1980s and into the 1990s and eventually set up a successful team of his own in CART.

Yip had long run a team each year at the Macau GP and in 1983 was behind the switch from Formula Atlantic rules to Formula 3. The result was a huge success and Theodore Racing has won the event many times, notaably with Ayrton Senna.

Yip faded into retirement as a car enthusiast in the late 1980s and finally sold his share of his company in Macau to his brother-in-law.

In 2003, Teddy Yip died at the age of 96. This caused a huge media frenzy in Asia, especially in Hong Kong, where the media covered the news about his death for one whole week, with all Yip's relatives from around the world attending the funeral covered by television and radio stations including magazines and newspapers.