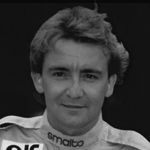 A promising French F3000 driver who was destined for F1 until he had a career ending accident at Brands in 1988.

Michel Trollé was a top kart driver in France between 1978 and 1982, the year in which he won the French Superkart title. He graduated to Formula 3 after winning the Elf Volant prize in 1984. He also made the first of his five apparances at Le Mans driving a Porsche 962 C with Philippe Alliot.

In 1987, he drove a Brun Motorsports Porsche 962C with Paul Belmondo and Pierre de Thoisy, but retired with accident damage after 88 laps. He also competed in F3000.

In 1988 he was back at Le Mans with Nissan, driving a Nissan R 88 S with Aguri Suzuki and Danny Ongais. His F3000 season came to a premature end with a huge accident in practice at Brands. In the same meeting where Johnny Herbert nearly lost his legs, Trolle crashed at the new chicane up the hill from Dingle Dell. The kerb launched his Lola over the gravel trap straight into the barriers, nearly costing him his legs as well. Trolle was being compared to Arnoux at the time and destined for F1 before this accident effectively put an end to his career.

He did make a return at Le Mans in 1990 driving a Courage C24 to 7th place with Fabre and Robert, and the following year when he was not classified in the same Courage C26 this time driving with Brand and Bourbonnais.