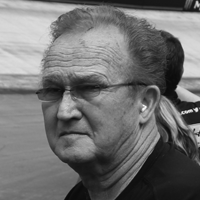 Clay Morgan Shepherd has been a NASCAR Nextel Cup driver since 1977. He has also raced in the Busch, and Craftsman Truck Series. He is a born again Christian who serves as a lay minister to the racing community.

Morgan's racing career began when he used his souped-up moonshine car to earn extra money on the weekends. He won 21 of 29 races to win the North Carolina title. Morgan finished in second in NASCAR's Late Model Sportsman division in 1973, driving in 17 different cars. In 1980 he won the series title.

Shepherd made his Winston Cup debut in 1970 at Hickory Motor Speedway, driving the #93 Chevrolet for Bill Flowers. He started tenth but finished ninteenth out of twenty-two cars due to rear end faliure. He made two more starts that year, his best finish a fourteenth at Hickory. He did not race in Cup again until 1977, when he finished tenth at Dover International Speedway in a Jim Makar-owned Mercury. He ran two additional races at Charlotte Motor Speedway and Atlanta Motor Speedway.

After running two races in 1978, Shepherd moved to the Cup Series full-time in 1981, driving the #5 Performance Connection Pontiac for Cliff Stewart. He won the pole in his first race at Richmond International Raceway, and also picked up his first career win at Martinsville Speedway. Despite a thirteenth-place points finish in points, Shepherd was runner-up to Ron Bouchard for Winston Cup Rookie of the Year honors. The following season, he moved over to the #98 Levi Garrett Buick for Ron Benfield. Although he did not win a race that season, he won the pole at Nashville Speedway USA and Atlanta, respectively, and had six top-fives, finishing tenth in the championship standings. That season, he also ran the Busch Series on a part-time basis for Ed Whitaker. He won his second start at Hickory Motor Speedway, then again at Indianapolis Raceway Park. Shepherd finished twelfth in points that season.

Shepherd began 1983 without a full-time ride, running the Richmond 400 with Wayne Beahr and the Virginia National Bank 500 with Emanuel Zervakis, before driving the #2 ACM Equipment Sales Buick for the rest of the season for Jim Stacy, his best finish being a second-place run at the Firecracker 400. His abbreviated season left him 20th in points. He continued to run for Whitaker in the Busch Series, winning at Bristol and Richmond International Raceway, but dropping to eighteenth in the final standings. Shepherd struggled in 1984, driving for multiple teams before closing out the year with Benfield, with whom he finished sixth at North Carolina Speedway. In the Busch Series, he drove a majority of the races for Lindy White, winning at Bristol, Indianapolis Raceway Park, and Martinsville.

For 1985, he drove for multiple Cup teams, the most of which for the #00 Helen Rae Special. After failing to finish all but two Busch races in 1985, Shepherd drove for Whitaker and himself the following season, winning a career high four Busch races during the season. In the Cup Series, he won his second career race driving the #47 Buick for Jack Beebe. He ended the season driving the #75 Pontiac Grand Prix, finishing 3rd at Richmond International Raceway. The following season, he oved to the #26 Quaker State Buick for King Racing, winning the pole at Martinsville and finishing seventeenth in the standings. It was also the first time in his Cup career that he competed in every scheduled event. He won another three races in the Busch Series, including his only career road course win at Road Atlanta.

In 1988, Shepherd continued to drive for a variety of teams, beginning the year with Tom Winkle in the #97 AC Spark Plug Buick, before driving a handful of races in his own car. He then drove five races for Mach 1 Racing, finishing 2nd at Dover after leading 110 laps, then moved to the #75 Valvoline Pontiac for RahMoc Enterprises, winning the pole at Pocono Raceway. After posting two top-tens in the #88 Red Baron Pizza Oldsmobile for Buddy Baker, Shepherd finished out the year in his own #57, before his team was purchased by RahMoc for the season finale. That year, he won the final Busch race at IRP. In 1989, he returned to RahMoc, winning his final pole at Watkins Glen International and finishing thirteenth in points.

In 1990, he scored a career high season-end ranking of fifth for Bud Moore Engineering in the #15 Motorcraft Ford Thunderbird. In addition, he picked up his third career win at the season-closing Atlanta Journal 500. After failing to win and dropping to twelfth the following season, Shepherd moved to the Wood Brothers Racing #21 Citgo Ford. Despite dropping to fourteenth in points in 1992, Shepherd moved back up to seventh in points and won his final race to date at Atlanta. The following season, he had sixteen top-tens finished sixth in points, his highest finish since 1990. After finishing in the top-five four times in 1995, Shepherd left the Wood Brothers team.

He returned to the #75, now a Ford wholly owned by Butch Mock and with sponsorship from Remington Arms. He posted five top-tens and finished ninteenth in points. He left at the end of the season to drive the #1 Delco Remy America/Crusin' America Phone Card Pontiac for Precision Products Racing. He led ten laps early in the season at Atlanta, before fading back to third. Midway through the season, Shepherd moved over to the #77 Jasper Motorsports Ford. After just a handful of races with the 77, he departed and rejoined PPR, now with R&L Carriers sponsorship. His best finish for the rest of the season was a twelfth at Talladega Superspeedway.

After beginning 1998 without a ride, Shepherd brought out his own team to attempt the spring races Atlanta and Darlington Raceway, but his #05 Pontiac failed to qualify in both races. In the following race at Bristol, Shepherd drove the #46 First Union Chevy for Team SABCO, finishing 24th, before substituting for Mike Skinner for two races, finishing eleventh at Martinsville. After another race for SABCO and a one-off deal for Stavola Brothers Racing at Michigan International Speedway, where he finished 43rd, Shepherd spent most of the season with LJ Racing, his best finish 15th at the Brickyard 400. He left the team late in the season, and closed the year in the Stavola's #8 Nokia/Kendall Chevy. He ran near the top-ten during part of the race, but wrecked and finished 39th.

Shepherd attempted the 1999 Daytona 500 in a car purchased from FILMAR Racing, but did not qualify. He made his only Cup start that season the following season the following week at North Carolina in the #90 Accu-turn/Pep Boys Ford Taurus for Donlavey Racing, where he started 39th and finished 32nd, five laps down. In May 1999, Shepherd announced he was partnering with Rhea Fain to field the #05 Wendy's Pontiac. After the team failed to qualify for the Coca-Cola 600, the partnership dissolved, and Shepherd failed in each of his attempts to qualify for a Cup race that season. He also had his most recent top-ten finish in NASCAR competition that season, finishing 10th in a Busch Series race at North Carolina for Xpress Motorsports.

Shepherd began 2000 in the Craftsman Truck Series driving the #7 for Conely Racing, finishing seventeenth at Homestead-Miami Speedway, but a lack of sponorship caused the deal to fall through. Shepherd attempted a pair of Busch races as well the season-finale NAPA 500 in the Cup Series for Hover Motorsports, but failed to qualify for all those events.

In 2001, Shepherd formed his own Truck team, Victory in Jesus Racing, and began campaigning the #21 Ford F-150 on a part-time basis. During this time, he served as his own one man pit crew during a truck race as he often climbed out of his truck to change his own tires and fill his own gas tank during pit stops. His best finish was eleventh at Daytona, as well as leading fifteen laps at South Boston Speedway. After making sixteen starts that season, Shepherd finished 26th in points. The following season, his best finish was a 17th at Richmond, the only race he finished that season. He also had the best points finish of his truck career, 24th. He also made his return to the Cup series in his #89 Red Line Oil Ford, beginning at New Hampshire International Speedway, where he finished 40th, his best finish that season. He also attempted a handful of races with Ware Racing Enterprises, but did not make a race.

The following season, he attempted six Cup races, but only made two, finishing last in both of them. In 2003, Shepherd failed to finish any of his truck races, his best finish coming at Darlington Raceway, where he placed 24th. He spent a majority of the season in the Busch Series driving the #0/70 Eagle Jet International Chevy for Davis Motorsports. His best finish was an eleventh at Talladega. Towards the end of the season, he switched over to his Victory in Jesus ride in the Busch Series, posting two top-40 finishes. In 2004, his Cup team switched to Dodge and attempted 32 races, qualifying for ninteen of them. His best finish was a 32nd at Martinsville, one of just two races he completed that season. In 2005, he only made four starts, and was unable to score higher than 40th.

In 2006, Shepherd brought on several Christian investors and sponsor Dutch Quality Stone, renaming the team Victory Motorsports. But after failing to qualify in every race he attempted, he sold the team to his partners. He runs part-time in the #0 for Davis in the Busch Series, his best finish 40th at Nashville Superspeedway. In July 2006, Shepherd and Christian businessman Dana Tomes of West Virginia formed Faith Motorsports with Shepherd driving. He made his first race of the year at the Chevy Rock & Roll 400, where he finished 43rd. The following week, he qualified for the Sylvania 300 and finished 42nd.

He currently holds the Nextel/Winston Cup record for the oldest driver to start a race: he was 63 years, 8 months, and 27 days old in July 2005 when he raced in the summer Cup event at Loudon. He became the second-oldest race winner (after Harry Gant) in 1993, when he won the spring race at Atlanta at the age of 51 years, 4 months, and 27 days.

Shepherd also operates his own charity, "The Morgan Shepherd Charitable Fund", and makes an annual trip each December to various places in the northeast. For his efforts, he was awarded the "Spirit Award" by the NMPA and Pocono Raceway in December of 2005.