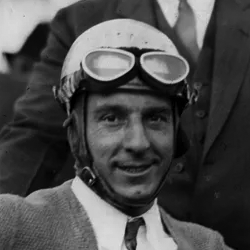 Winner of the Indy 500 in 1935 and generally pretty unpleasant character. One owner once remarked that he'd love to have Kelly drive for him, "if you could just bring him to the track in a cage and only open it to put him in the car."

Keyy Petillo with his riding mechanic, Jimmy Dunham, at Indy in 1935, the year he won.Not all racing drivers are decent chaps, some are simply obnoxious and some are even darn right evil. Take Violette Morris she was known as the Gestapo's Hyena which will give you a some idea of her nature (though she was actually even worse than that nickname suggests).

Well Kelly Petillo was another unsavoury character. Born Cavino Michelle Petillo in Pittsburgh, Pennsylvania, the son of Italian immigrants. His father Luigi moved the family to Los Angeles, California, where they ran a grocery shop.

Cavino, who used his middle name, got his nickname when a teacher mistook Michelli for 'me Kelly' and the name stuck.

Growing up Kelly was a short tempered teenager who was also know as 'the Shiv' (the Knife) and though racing kept him out of trouble for a while it was almost inevitable that it would find him sooner of later.

Ambitiously he attempted to qualify for the Indy 500 in 1928 but crashed in practice however the following year he won a road race from Bakersfield to Los Angeles and started racing on the Legion Ascot Speedway oval track. It wasn't long before he was making a name for himself and in 1931 finished 10th in the Pacific Southwest Championship, one of the most competitive in the country.

Notoriously hard on his cars and his aggressive driving style did not endear him to other drivers or owners. However his break came in 1932 when he was given the drive in the Miller powered sprint car know as 'Lil Poison'. He also qualified for the Indy 500 that year finishing a respectable 12th. In August he took the win in a 30 feature race at Ascot and signalled his arrival as a top driver. He won three more features at Ascot and ended the season 8th in title standings.

In 1933 he finished 4th in the Championship due in part to a more measured approach to his driving and in 1934 things went even better. He qualified his Adams Miller on pole for the Indy 500, took a number of wins at Ascot and won his first AAA race in December in a 300 mile event on the road course at Mines Field. Partnered by his riding mechanic Takio Hirashima the race actually was stopped after 200 miles due to thick fog. he ended the season 4th in the Pacific Southwest Championship and seventh in the Mid-West standings.

1935 was to be his best year. After a number of wins early in the season, in May he went to Indy for the 500. He had put his own car together with the help of family and friends who had come up with the necessary money. His father even mortgaged his shop to help and Fred Offenhauser had agreed to lend him an engine on condition that he took part of any prize money. In qualifying he put the Peter DePaolo run Gilmore Speedway Special Wetteroth Offy on pole but was disqualified for a refuelling violation. On his second run the engine let go but after getting repaired locally he finally made the show in 22nd. In the race he worked his way through the field to take the win, the first for an Offy powered car. His riding mechanic that day was Jimmy Dunham. Jimmy was working on a dairy farm doing general maintenance for the farms owner when he was asked if he would be the ride along with Petillo in the race. It was Dunham's only race and he went on to be a successful salesman.

Kelly also took AAA wins at St. Paul and Langhorne to take the AAA National Championship. That year drivers tried to organise into The National Championship Drivers of America. Prize money for most races was meagre and the drivers felt that if they promoted races themselves, they could take a bigger share of the gate receipts. Rex Mays, Floyd Roberts, Lou Meyer, Wilbur Shaw, Fred Frame and Bill Cummings all signed up but not Kelly Petillo. Where the other drivers agreed to forego appearance money, Petillo would not. As the latest Indy winner he was important to the group. A compromise could not be reached and after promoting two races at Ascot and one at Oakland with the drivers making even less than usual, the NCDA disbanded.

His obnoxious nature and arrogant ways became even worse after his success in '35. However his demanding ways were more than matched by his racing ability. one owner was heard to remark that he would love to have Kelly drive for him, "if you could just bring him to the track in a cage and only open it to put him in the car."

He continued to race even taking on the Vanderbilt Cup in 1937. He made his last appearance at Indy in 1941 and with the outbreak of war, would never return to racing.

As for trouble, it caught up with a vengeance. there were numerous charges of assault, drunkenness and disorderly conduct. During the war he was involved in the shooting of a Marine in a Los Angeles saloon that he was running at the time.

He attempted to enter the 500 in 1946 but his entry was rejected and in 1948 he was sentenced to one to ten years for attacking his former secretary with a knife with intent to kill. He was paroled in 1955 but was back behind bars two years later for parole violations when he travelled to the Indy 500 from California.

He submitted another entry for the 500 in 1959 just weeks after his release from jail but once again the Speedway rejected it.

He died of emphysema in 1970 and is buried in the Grindstone Cemetery in Glen County, California.