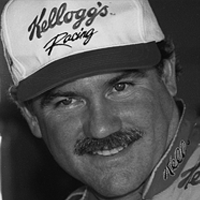 Terry Labonte is a retired NASCAR driver who occasionally drives in the Sprint Cup Series when called upon.

Labonte was introduced to the sport through his father, who had worked on race cars as a hobby for his friends. He is the older brother of 2000 NASCAR Winston Cup champion Bobby Labonte, and the father of former Nationwide Series driver Justin Labonte.

Terry Labonte started racing quarter-midgets when he was 7 and won a national championship at nine before moving onto the local short tracks in a stock car as a teenager. Driving on both dirt and asphalt, he won track championships in his hometown, in Houston, and in San Antonio from 1975 to 1977. During this time he also met Louisiana businessman Billy Hagan.

Labonte’s first NASCAR start came in 1978 at Darlington Raceway. He qualified nineteenth in the #92 Duck Industries Chevrolet and finished fourth that weekend. He ran four more races that season and had an additional two top-ten finishes. In 1979, he competed for NASCAR Winston Cup Rookie of the Year along with Dale Earnhardt, Harry Gant, and Joe Millikan while driving the #44 Stratagraph Chevrolet for Hagan. Although Labonte failed to win the top rookie award, he was one of three rookies to finish in the top 10 in points. He ended the season with thirteen top-ten finishes. The following year, he won his first career Winston Cup race on Labor Day weekend at Darlington. He won $222,501 in prize money for the year and finished sixth in the final points.

Labonte failed to return to victory lane over the next two years but did not finish outside the top-five in the final standings. He won his second career race in 1983 in the Budweiser Chevrolet. His team received sponsorship from Piedmont Airlines the following season, and he won races at Riverside International Raceway and Bristol Motor Speedway, clinching his first Winston Cup championship. He dropped to seventh in the final points in 1985. During that same season, he made his Busch Series debut at Charlotte in the #17 Pontiac owned by Darrell Waltrip and won the 400-mile race, the longest in Busch Series history. Waltrip asked Labonte to drive after deciding to focus his driving his priorities solely to Winston Cup racing during the middle of what would be Waltrip's 307-point gain over Bill Elliott in the final eight races of the 1985 season.

Labonte fell back to twelfth in the standings in 1986. Before season's end, he announced he was leaving Hagan's team to drive the #11 Budweiser Chevrolet for Junior Johnson's team the next year. In his first season with his new team, he earned four pole-position starts and won the Holly Farms 400, leaping up to third in the final standings. He followed that up with a fourth-place points finish in 1988, including a win in Sprint All-Star Race IV. In 1989, the team switched to Ford Thunderbirds. Despite two wins during the season, he fell back to tenth in the championship.

In 1990 He signed with the #1 Skoal Classic Oldsmobile team for Precision Products Racing. He had four top-fives and nine top-tens but finished 15th in the points standings. He returned to Billy Hagan's team to drive his #94 Sunoco Oldsmobile in 1991, winning his first pole since 1988. He began 1992 with finishes inside the top 8 in each of the first eight races. He had a total of four top-five finishes and sixteen top-tens, ending the season eighth in points. The following season, the team switched to the #14 Kellogg's Chevrolet. While he had ten top-tens, for the first time in his career, Labonte failed to finish a race in the top-five and he dropped to eighteenth in points.

In 1994, Labonte joined Hendrick Motorsports, racing the #5 Kellogg's Chevrolet and responded by notching 3 wins in each of his first two years there. In 1996, he broke Richard Petty’s streak for consecutive races after winning at North Wilkesboro. Despite only two victories, Labonte went on to win the championship that year as well, a record-setting twelve years after his first. Driving with a broken hand during the last two races of the season, Labonte and his younger brother Bobby were able to perform a dual victory lap at Atlanta Motor Speedway in the last race of the year; Bobby won the race and Terry the championship on the final day of the season, the only time a driver and his sibling won the race and the championship at the same time.

Labonte posted twenty top-ten finishes in 1997 and notched his only win of the year at the fall race at Talladega Superspeedway. In 1998, Labonte was able to win the Pontiac Excitement 400 and finished ninth in points. Despite a win at his home track at Texas Motor Speedway and Sprint All-Star Race XV in 1999, Labonte finished 12th in the championship points, the first time he had finished outside the top-ten since 1993. The year 2000 saw Labonte's consecutive start streak broken at 655 after he suffered inner ear injuries at the Pepsi 400 and was forced to miss the Brickyard 400 and the Global Crossing @ The Glen. He began 2001 with two top-six finishes in the first seven races but finished 23rd in the final point standings. He dropped back to 24th in 2002.

In 2003, Labonte won his first pole since 2000 at Richmond and won the Mountain Dew Southern 500 (where 23 years earlier he won his first race) at Darlington Raceway after leading the last 33 laps. It was only his second win in a major (the first being in the Florentine classic in 1980). That helped lead him to a tenth place spot in the final standings. 2004 was much more of a struggle for Terry Labonte, and Hendrick Motorsports even announced Kyle Busch as Labonte's replacement when he retired. Late in the 2004 season, Labonte announced that 2004 would be his final full-time year on the circuit and would run part-time schedules for the next two years. The part time schedule was nicknamed, "Shifting Gears: Lone Star Syle"

Labonte began his semi-retirement in 2005. He borrowed the number 44, his former number, from Petty Enterprises and ran Hendrick's #44 research and development car with sponsorship from Kellogg's, Pizza Hut, and GMAC. His best finish in 2005 for Hendrick Motorsports came at Pocono Raceway, where he finished 12th. He also drove a few races in the #11 Fedex Chevrolet for Joe Gibbs Racing following the release of Jason Leffler, with a top finish of 9th at Richmond.

Labonte began the 2006 season driving the #96 Texas Instruments/DLP HDTV Chevrolet Monte Carlo car for Hall of Fame Racing, a new team started by former Dallas Cowboys quarterbacks Roger Staubach and Troy Aikman. Labonte's past-champion's provisional guaranteed the team a starting spot in the first five races. Labonte's finishes in those races left the team in 30th place in points, sealing a spot for the team in each race as long as they remained in the top 35. Tony Raines took over the driving duties for the #96 car and ran the rest of the season's races, with the exception of the road-course races at Infineon Raceway, in Sonoma, California, and Watkins Glen International, in Watkins Glen, New York. Labonte's best finish of 2006 came at Infineon, where he finished 3rd due to a fuel mileage gamble by the crew chief of the #96 DLP/Texas Instruments Chevrolet, Philippe Lopez. Labonte also ran ten races with Hendrick Motorsports research and development car in 2006.

During the 2007 season, Labonte drove three races for Michael Waltrip Racing, both road course events, and the Allstate 400 at the Brickyard, in the 55 NAPA Auto Parts Toyota Camry.

On May 11, 2008, it was announced that Labonte would drive the #45 car of Petty Enterprises for six races in the middle of the 2008 Sprint Cup season, replacing Kyle Petty on a temporary basis. Labonte was reunited with brother Bobby, who was the regular driver of the #43 for Petty. Labonte posted two solid top-twenty runs in the six-race tenure, a 16th at Daytona and a 17th at Infineon, both the best finishes for the 45 car this season. It was later announced that Terry would drive for Petty again in the Brickyard 400 and would also drive in place of Patrick Carpentier in the The American Red Cross Pennsylvania 500. Terry Labonte was back in the # 45 car for Petty Enterprises when the Sprint Cup Series went to the Michigan International Speedway for the 3M Performance 400 on August 17, 2008. Terry Labonte would be back in the # 45 car again for the AMP Energy 500 at the Talladega Superspeedway for the final time in the 2008 Sprint Cup Season. He would go on to post a 17th-place finish, even after sustaining severe damage in one of the multi-car accidents. Labonte's results in 2008 proved far better on average than the previous three seasons, while driving also part-time.

It was reported first on January 23, 2009, that Labonte would attempt to make the Daytona 500 for MSRP Motorsports. On January 26, it was announced that MSRP has changed its name to Prism Motorsports, and Labonte would drive their car for the Daytona 500. The car was sponsored by Window World. The team announced they planed to race full-time with Dave Blaney after Daytona. Terry started 43rd in the Great American Race, and went a lap down. He managed to get his lap back and fought up to finish 24th in the rain-shortened event.

Starting at Indianapolis in 2009, Terry will be driving the #08 Toyota for Carter / Simo Racing.

NASCAR wanted a driver they were assured would not race in the NAPA Auto Parts 200, and were concerned Childress drivers Jeff Burton or Kevin Harvick would race in the event.

In 1998, the senior Labonte was named as one of NASCAR's 50 Greatest Drivers. A park was renamed for the Labonte brothers in their hometown of Corpus Christi in 2001, and they were chosen for entry into the Texas Sports Hall of Fame in 2002. Labonte supports a variety of charities and due to his efforts, the Ronald McDonald House in Corpus Christi, the Victory Junction Gang Camp near Randleman, North Carolina, and the Hendrick Marrow Program all have benefited.

Labonte has lived in the Thomasville, North Carolina, area for most of his career. Terry and Kim Labonte married in May 1978 during his first year with Billy Hagan's team after meeting at the car dealership where both worked while in high school in Texas. They have two children who have grown up around racing just as Labonte did years ago. Justin Labonte, born in 1981, was a late model track champion at Caraway Speedway in North Carolina in 2003 and raced a limited Busch Series schedule in 2004 (including a win at Chicagoland Speedway in July) with sponsorship from the United States Coast Guard. That sponsorship expanded to allow a full schedule in 2005. Kristy, born in 1983, graduated with a business marketing major from High Point University. Terry enjoys hunting and fishing, as he is an all out outdoorsman.

Labonte was the Sports Marshal for the 80th Annual Shenandoah Apple Blossom Festival in Winchester, Virginia from May 1 to May 8, 2007.

Terry became a grandfather for the first time on June 2, 2009 when daughter Kristy and son-in-law Matt Garrett had a baby boy. Asher Franklin Garrett.

In addition to his 22 wins in Sprint Cup, Labonte has won 11 races in the Nationwide Series and 1 in the Craftsman Truck Series. He has been the champion of the 24 Hours of Daytona and 12 Hours of Sebring as well as three all-star races: the Busch Clash (now known as the Budweiser Shootout) in 1985 and The Winston (now the Sprint All-Star Challenge) in 1988 and 1999. He also won the IROC championship in 1989. Including his two championship seasons, he has finished in the top 10 in the year-end standings 17 times, and his top-five and top-ten totals approach 25 percent and 50 percent, respectively, of his total races.