An accomplished amateur motorcycle racer before the war, he took up auto racing post war. He is famous for creating a small Porsche Spyder in 1951 that later inspired the factory to build the Porsche 550. 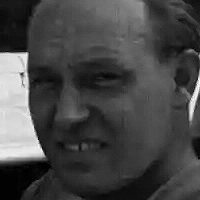 Walter Glockler was a successful Frankfurt auto dealer who had one of the first Volkswagen dealerships after the war.

An accomplished amateur motorcycle racer before the war, he took up auto racing as well and plunged into postwar racing with enthusiasm backed both by money and by the facilities and staff that his dealership supported. The Glockler shop was run by Hermann Ramelow who had worked on the prewar Adler sports cars, and in 1948 Ramelow created a mid-engined Hanomag-powered special for Glockler to race.

For the 1950 season they adopted the newly available L1-liter Porsche engine, mounting it mid-engined with the rear suspension reversed as on the original Porsche 356 roadster in a tube-frame chassis with a central driving position and lightweight aluminum bodywork by C.H. Weidenhausen of Frankfurt. It weighed in at under 1,000 Lbs., and even with under-50 horsepower Glockler won the 1950 German 1,100 cc sports-car championship with it. Converting the Porsche engine to run on alcohol brought it to 62 horsepower and kept the Glockler special competitive in 1951.

Glockler's success, and the attention to quality and detail that his car evidenced, brought recognition from Porsche, and a collaboration was begun with Glockler agreeing to badge his cars as Porsches to bring publicity and recognition to the company and its products. Porsche in turn assisted with the latest engine developments - now coming fast and furious from the company's success and continuing development. The line of development with Glockler and Ramelow began would eventually flow back to Porsche in Zuffenhausen where in 1953 Porsche began to build its first series of racing cars, Project 550.

Glockler and Ramelow built their next special for the 1951 season. Its construction details were similar, but behind the driver sat the latest 1,500 cc Porsche engine, and it rode on beautifully detailed magnesium alloy wheels with integral brake drums made by Alex von Falkenhausen. Extensively lightened, meticulously constructed to balance strength with light weight and streamlined to the point where it even had a full belly pan, the 1951 Glockler weighed only 990 lbs. Its Porsche engine again was tuned to run on alcohol (a wise choice not only for performance and engine cooling but also because of the erratic quality of gasoline in postwar Germany) and pumped out 85 horsepower. With it he won the West German title.

He also set 1,500 cc international speed records at Montlhery in September 1951 at distances up to six hours, covering 1,104 km at an average speed of 184.11 kph (114.35 mph) in the diminutive racer. For this and some other outings Glockler fitted a lightweight removable hardtop that was carefully conceived and constructed with windows fit flush to preserve smooth air flow.

It came to the attention of Park Avenue's import genius Max Hoffman, who aquired it shortly after the record runs and brought it to the U.S. He raced it in Florida in the winter of 1951-52, winning his class and placing second overall in a one-hour racer at Vero Beach in March 1952, then in the Northeast where he won with it at Thompson in Connecticut and finished second in the Mecox Trophy race at Bridgehampton on Long Island.

The one shortcoming of the first two Glockler-Porsches was shared with the original Project 356 Porsche roadster, the toe-in that deflection of the rear suspension produced because of the leading arm layout of the reversed rear swing-arm suspension. Its effect was ameliorated by the lightweight, stiffly sprung Glockler-Porsche, which minimized body roll, but it was apparent to Hoffman both in cornering and particularly under braking.

Glockler and Ramelow decided to deal with this specific issue in the third Glockler-Porsche in 1952.

The third Glockler-Porsche adopted the standard Porsche rear-engined layout with the rear suspension in its 'proper' trailing-arm configuration. Based on a standard Porsche cabriolet floorpan, Ramelow undertook the now-standing lightening modifications, removing everything that was nonessential and drilling out much of what was left. A 1,488 cc Porsche engine, again tuned with high compression to run on alcohol, made 86 horsepower.

Weidenhausen created the body from aluminum with a nose that bore close resemblance to the 356 Porsche but had semi-skirted rear wheels and cutaway rear corners similar to Glockler-Porsche 1 and 2. The standard two-seat interior layout of the cabriolet with the driver on the left was retained although very lightweight bucket seats were fabricated and installed. Its standard Porsche floorpan and two-seat interior brought a weight consequence even with Ramelow's extensive lightening efforts, and Glockler-Porsche Number 3 weighed some 1,133 lbs.

Like the earlier Glockler-Porsche, Number 3 had a full belly pan below the Porsche floorpan and had an air intake low on the nose for an oil cooler. Small air intakes on each side of the nose brought cool air to the front brakes. It was designed from the outset with a removable coupe roof with flush-fitting windshield, side windows and rear glass for minimal surface drag. The low windshield was integrated with the body. At various times both the AFM magnesium wheels and knockoff steel wheels were fitted; the steel wheels, like the rest of the Glockler-Porsche, were drilled for lightness and brake cooling.

Walter Glockler turned the driving over to his brother, Helm, who won his class and set a new class record in the spring of 1952 race at the Nurburgring (running without the hardtop) on his way to winning the 1952 German championship. In August, Hans Stanek, of the Swiss VW/Porsche importer AMAG, hill-climbed it, then it was sold to Max Hoffman in the U.S., complete with the hardtop and AFM magnesium wheels.

Upon receiving it, Hoffman entered the May 1953 road races at Bridgehampton on Long Island but turned the driving over to Johnny Von Neuman, soon-to-be successful Porsche distributor on the West Coast. Von Neuman finished third in the 1,500 cc class and brought the Glockler-Porsche and Hoffman valuable publicity, including the cover photo in the September-October 1953 issue of the SCCA magazine, Sports Car. Shortly thereafter Hoffman sold Glockler-Porsche Number 3 to Fred Proctor, Jr. of Connecticut.

Proctor took his new Glockler-Porsche to the Giant's Despair hill-climb and Brynfan Tyddyn road races in Pennsylvania in July 1953 and finished second in class in both events. Another second followed on August 8 at Lockbourne Air Ford Base in Ohio, then a third at Thompson Raceway in Connectiuct.

After that, the Glockler-Porsche Number 3 disappeared for several years before showing up in 1958 in Denver in the hands of Alex Thompson. Its appeal and quality apparently endeared it to Denver-area enthusiasts, and it passed through several hands including Charlie Lyons' and possibly even Bob Carnes', the creator of the Bocar specials, before ending up with automotive sculptor Larry Braun of Loveland, Colo., in the late '60s.

Braun began a restoration which languished semi-finished for many years stored in an open shed, but the car was fortunately preserved by the arid Colorado climate until it was eventually located and acquired by the present owner in 2000. A comprehensive restoration was carried out by Tempero Restorations in New Zealand, specialists in restoring and constructing lightweight aluminum body work.


With thanks to Gooding and Company Auctioneers