Boffa won numerous races in Italy and abroad, mainly at the wheel of Maserati Sport cars. In 1961 he entered four non-championship Formula One races with a Cooper T45. 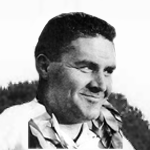 Born in Benevento and though he was actually born on December 23, 1929, but his birth was not registered until January 4, 1930 (Hence his appearance on this web site on this day).

His interest in racing began when his father Carmine took him to see the Grand Prix of Posillipo in Napoli when he was 8 years old.

He first competed in hill climbs in 1953 at Catania-Etna driving a Fiat 1100R which was his daily driver for commuting to work in Sicily, though he set fastest time in his class he noted that the Italian champion, Gino De Sanctis, who apparently was driving a very similar car, was quicker.

During the week before the Grand Prix of Posillipo in 1955, Cesare Fiorio's father purchased a Lancia Aurelia B20 with which Mennato drove in the race. He set the fastest lap by quite a margin but spun frequently in the Ascari curve. The next week it was discovered that the Aurelia had a loose rear shock absorber.

In 1956 and 1957 he drove a Maserati 1500 Sport taking 28 wins pertty much without incident apart from a crash in the Tour of Sicily due to a misunderstanding while he attempting to overtake Franco Cortese .

He got a works Ferrari drive for the Tour of Sicily and the Posillipo Grand Prix in 1957 at the wheel of a Ferrari Testarossa 2000 CC.

In 1959 he drove a Maserati A6G with Piero Drogo in the Targa Florio finishing 5th.

He won the Italian Sportscar Championship in 1960/61 and then again in 1964 after 3 years away from racing even though he did not run a full program of races. In fact he should have won the title in 1958 as well as he was the highest points scorer however there was a requirement to complete a minimum number of races which he failed to do, the title thus going to Tedeschi.

In 1960 he came third in the European Mountain Championship and in 1961 he was runner up in the Porsche Sport European Championship. In 1961 he also competed in three race non- championship Formula 1 races driving the ex-Jack Brabham Cooper T45 Climax 1500 cc.

In the poorly attended 1961 Vienna Grand Prix he qualified fourth and was classified fifth, albeit 14 laps down on the winner. At Syracuse he started 17th and finished ninth, seven laps down. However he retired at his favourite Grand Prix at Posillipo (Naples) on lap five after an accident with Keith Greene and later in the year he failed to qualify for the Modena Grand Prix where he was 3.5 seconds slower than pole-sitter Stirling Moss. The following week, he was on the entry list for the 1961 Italian Grand Prix but withdrew before the event. After the 1961 season, Boffa moved away from Formula One and did not participate at that level again.

The car was sent to England due to a number of problems the car did not return for some time. When the car did return he entered in the Italian Grand Prix, but did not take part.

It wasn’t until 1979 that he made another comeback on the track and on the hills. Driving a 1150 cc Rhythm Gp 2 he picked up a number of good results at both disciplines. He also drove an Osella 2000 BMW once again getting some good results between 1979 and 1980.