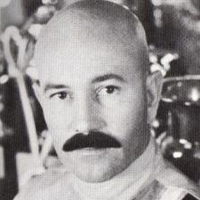 This initial effort was unusual in that it utilized a 1.6 litre Palllsar- Winklemann WDB2 Formula B car ballasted with enough weight to be classified as a Formula 1 car. After qualifying 24th in a field of 33 cars and placing 21st and 25th in the two heat races, It was obvious that the 300 horsepower deficit was too great to overcome even on such a tight circuit. As a result, no further attempt was made In this direction.

Ron was victorious during the next couple years winning his third consecutive Southern Pacific Formula Ford and Formula B SCCA Championships, and his third ARRC National Championship medal.

After this success, Ron was approached by Zeke and Ed Justice to drive their 1971 Lola T-192 F-5000. Even though this three-year-old Lola was considered outdated, Ron accepted hoping it would eventually be updated to a newer more competitive race car. The Justice Brothers (JB) wanted to compete in SCCA’s West Coast Formula regional/national events, and in F-5000 professional events. The JB effort began on July 14,1974 in a Formula A SCCA event held at Ontario Motor speedway, Ontario, CA. The JB Lola qualified on pole ahead of Danny Ongias in a newer Lola T-300 and turned fastest lap with a new class track record, but failed to finish (DNF) with an engine failure.

During the next couple years, this pattern would be repeated in subsequent regional/national events. The JB Lola T-192 picked up several victories and placings along with fastest laps and track records, but was continually plagued with ongoing mechanical DNFs. Mechanical DNFs also persisted throughout the next two years of the Justice Brothers’ effort in Professional F-5000 racing. Nevertheless. Ron and the JB team were justifiably proud of running In the top half of the forty-car fields, and finishing the Inaugural 1975 Long Beach Grand Prix - 8th In the heat race and 18th in the main race. This finish In Long Beach was their best effort.

Ron’s hope that the Justice Brothers would eventually upgrade their racing efforts with professionally built engines and a contemporary race car never materialized. Two years after the Long Beach finish, Ron would race for the JB Team one last time at an SCCA regional/national on Riverside’s 3.3 mile course. On May 29,1977 behind the wheel of the JB Team’s 1972 Surtees TS-11 F-5000 car, Ron qualified on pole, won the race, and set a new class track record. Ron made his last appearance in the F-5000 Professional Championship during its final year at Riverside International Raceways on October 17,1976 driving a 1974 Eagle 74A F-5000 car owned and prepared by Mike Koslowsky of Upland, CA.

After completing only 13 practice/qualifying laps and qualifying 23rd in a field of 38 cars, the engine failed. With no spares, the team was unable to run the race. Since Ron had never driven or tested the Eagle before, he had not even begun to test the limits of the car when the failure occurred. This was extremely disappointing as this was the most up-to-date, competitive F-5000 car he had had the opportunity to drive. The Eagle was clearly capable of running up front.

Ron still actively competes in motor racing with his last finish being 5th overall in a field of 24 cars in the Las Vegas Historic Grand Prix (HGP) for F-1 cars held on April 8, 2007. This was the main support race for the Champ Car World Series and was held on the downtown city streets. Retired Indy 500 winners did well with Bobby Rahal (Brabham BT-44) winning the race and Arie Luyendyk (Wolf WR-6) finishing 4th... two seconds ahead of Ron Dykes (Theodore TY-01).