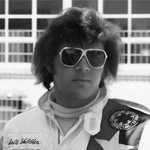 David "Salt" Walther is a former driver in the USAC and CART Championship Car series. He also drove NASCAR stock cars, unlimited hydroplane boats, and was a car owner in USAC. He was severly injured and burned in 1973 Indianapolis 500 race.

"I've seen the movies of that start hundreds of times since. Andy Granatelli gave me the film of the race. It came out in the papers that i said that maybe I didn't get bumped. Plain and simple. You slow down the film and there's no other conclusion you can come to. "In that crash forty percent of my body was burned. Parts of my kneecap were smashed. My left hand was burned so bad that the tips of all the fingers were amputated. My other hand - the fingers are at different angles to each other, which you don't really notice most of the time 'cause the hand's not spread open in ordinary circumstances. Over the left hand I wear a glove, a black glove. "When I finally did come back to racing, the other drivers didn't coddle me about what I'd been through. One driver, when he saw me, made a claw of his hand and with that warped fist, waved and said, "Hi, how are you?" Billy Vukovich called me after I'd been out of the hospital a while and said "We just want to tell you we just inducted you into the Crispy Critter Club." "By then, I could laugh about it. For a while though, it was touch and go. I was in the Michigan Burn Center for two and a half months. They were going to cut off the left hand at first, but the doctor felt he could save it. I had a lot of skin grafts on it. "When somebody's hurt, he goes through a helluva rehabilitation process. I had to learn to walk again. When they got me up to walk, I'd get dizzy and go sit back down. Then they had two big fellas, two great big fellas, come in and lift me up and hold me up in the air and let me try and move my legs. But I didn't have enough muscles to do anything. I couldn't walk at all. "I remember the first time I saw what I looked like. This was after I'd begun to walk on my own. There was a mirror over the sink in the bathroom. And I looked in it. And I saw myself and , honest to God, didn't believe it was me. I couldn't believe it was that bad. I had no brows and almost like a burr haircut. And I was wasted. I'd lost fifty pounds or so. "I was astounded. I didn't cry 'til I got back to the bed. I think I cried for about two minutes. Then I thought: Well, shit. This isn't going to do any good either. But for a while I was very depressed. "When I finally got out, I was still weak. And I set to work to build myself up. For my hands I got a box of sand. I'd splash on the alcohol and take a handful of sand and squeeze and squeese it. Then I progressed to hand grips. "When I first got out, I remember I put on my nice-looking crepe slacks and my good-looking shirts. And I looked like a skeleton walking in them because they didn't come close to fitting. I mean, I was skinny. Eventually I began to work with the weights. "See, that's where I was so fortunate. I've been lifting weights since I was sixteen years old. And you know, hell, I was a damn good athlete. One of the top athletes probably in the country. But after the wreck, I looked like I was fifteen years old again. A scarecrow."  Walther died in Trotwood, Ohio on December 27, 2012 at the age of 65.