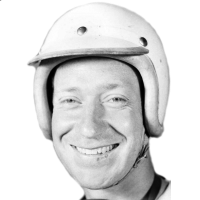 Magill raced in the AAA and USAC Championship Car series from 1955 to 1959. He drove Fangio's car at Indy in 1958 when the Argentine could not drive due to a contractual conflict. Mike Magill died 16 years ago, he was 86

Charles Michael Magill was born in Haddonfield, New Jersey. After serving in the Army during World War II, Magill raced in the AAA and USAC Championship Car series from 1955 to 1959, with 15 career starts. He finished in the top ten 7 times, with his best finish in 4th position in 1955 at Langhorne.

Magill competed in the Indianapolis 500 three times, with his first start coming in 1957. The next year, when racing legend Juan Manuel Fangio was unable to compete due to a contractual conflict, Magill drove the car in which Fangio had been practicing. He was involved in an accident in the first lap of the race but, after over an hour in the pits, he returned to the track to finish 17th. He drove in his final 500 in 1959, when he was eliminated from the race in a four-car accident.