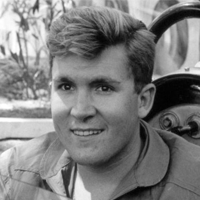 ance Reventlow was a wealthy playboy, entrepreneur, and racing driver. He was the stepson of actor Cary Grant. Raced in F2 in Europe before returning to the States and setting up Scarab race cars. He died in a plane crash in 1972. Lance Reventlow died 50 years ago, he was 36 , He would have been 86.

Lance Reventlow was a wealthy playboy, entrepreneur, and racing driver. He was the stepson of actor Cary Grant.

Count Lance von Haugwitz-Hardenberg-Reventlow was the only child of Danish nobleman Count Curt von Haugwitz-Hardenberg-Reventlow and American socialite Barbara Hutton who almost died giving birth to him. He was born at Winfield House in London, built by his mother and named for her grandfather Frank Winfield Woolworth. His parents' marriage was a tumultuous one, filled with his father's emotional and physical abuse of his mother and his mother's growing alcohol and drug addiction. She had inherited the Woolworth department store fortune and was then one of the wealthiest women in the world. The marriage, Barbara Hutton's second of seven, did not last and the child became the subject of a bitter custody battle.

Left to be raised by nannies and boarding schools, Lance Reventlow was six years old when his mother married actor Cary Grant who took the already troubled boy under his wing. Reventlow's mother and Grant divorced on July 11, 1945 and two days later the then nine-year-old was abducted by his biological father and taken to Canada but later returned. Grant remained close to Reventlow, who spent a great deal of time in the Los Angeles area.

In 1948, at age 12, Reventlow was introduced to the world of Grand Prix motor racing when his mother married Prince Igor Troubetzkoy who won the Targa Florio that year. As a teenager, Reventlow's money afforded him the latest in exotic cars that led to his involvement in motor racing.

In Hollywood, Reventlow became friends with fellow auto enthusiast James Dean and competed in club events around California. On September 30, 1955 Lance Reventlow was one of the last people to speak to Dean when they met on their way to an auto race in Salinas, California. Dean was killed a few hours later in his racing Porsche 550 Spyder.

Reventlow eventually decided to go to Europe to race cars and spent a season driving Cooper Formula 2 cars. He then returned to the United States and set up his own company in Venice, California to construct Chevrolet-powered race cars he named Scarab. Along with hired driver Chuck Daigh, the two were initially successful in racing.They won the majority of major sportscar events they entered, often in competition with the Cunningham team of Lister Jaguars. Daigh drove a Scarab to victory in the 1958 Riverside International Grand Prix in California beating a field of international race car teams, including the world famous race car driver Phil Hill and the Ferrari Team. Carroll Shelby drove a Scarab to first place at Continental Divide Raceways in Castle Rock, Colorado, breaking a course record.

In 1959, Lance Reventlow visited the mother he barely knew at her new mansion in Cuernavaca, Mexico. She had just divorced her sixth husband. Reventlow confronted her over his upbringing, and after a heated argument the two parted company. Already reluctantly in the media spotlight because of his mother and the family wealth, shortly after the confrontation with his mother, Reventlow married actress Jill St. John. The glamorous couple were the focus of much media attention and his racing team was much talked about for having built the first Formula One race car in America. Shifting operations overseas to Britain, Reventlow's team raced the Scarab cars in Formula One with little success against the new rear engine race cars. Lance went back to the drawing board and built a very competitive prototype Scarab rear-engined car, but had became less interested in racing before its testing was complete. In 1962 he shut down the operation, leased the California facilities to Carroll Shelby, and quit auto racing altogether.

Reventlow's marriage to Jill St. John ended in divorce in 1963. In 1964, he married ex-Mouseketeer Cheryl Holdridge, introduced to him by his friend, singer Jimmy Boyd. The couple mostly remained out of the glare of publicity for several years. An avid Alpine skier, hiker, and pilot, Reventlow maintained a home in Aspen, Colorado. It was there in 1972 while looking at an area to build a ski resort with real estate brokers, that, according to the NTSB report, Reventlow was a passenger in a Cessna 206. Unknown to Reventlow, (who was a fully rated instrument, multi engine, commercial pilot with thousands of hours), the Cessna pilot was an inexperienced 27-year-old student who flew into a blind canyon and stalled the aircraft while trying to turn around. The small plane plunged to the ground, killing Lance Reventlow and the others aboard. Cary Grant took some of Lance's closest friends along with him in his plane to Aspen for Reventlow's memorial service, given by his widow Cheryl. His widow later married Manning J. Post, a major figure in the Democratic Party in California.