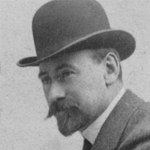 One of the leading drivers at the dawn of motor sport. He won the Gordon Bennett Trophy in 1901.

Leonce Girardot, who liived at 7 Rue Ampere in the western suburbs of Paris, France, was one of the best drivers at the dawn of motor racing. He started racing in 1897 finishing 16th in the Paris-Dieppe race. He finished 24th in the Paris-Trouville later in the year and retired in the first race of 1898, the Paris-Bourdeaux.

He drove for Panhard and Levassor, a leading manufacturer at this time and his main competition came from his teammates Fernand Charron, and René de Knyff.

He then started a string of good results beging with a second in the Paris-Amsterdam-Paris race of 1898. He followed this up with another second in the Tour de France for automobiles in 1899. He finished third in both the Nice-Castellane-Nice race and the Paris-Bourdeaux that year, and finished second in the race from Champigny to St.Germain. He took two wins, the Paris-Ostend and Paris-Bologna races.

The first Gordon Bennet Trophy was held in June 1900 between Paris and Lyons with the French being represented by a trio of Panhards for Rene de Knyff, Fernard Charron and Girardot. Only two cars finished with Fernard Charron taking the win in just over nine hours despite bending an axle after he hit a dog. Second, and the only other finisher, was Girardot who hit a horse and sunsequently struggled with damaged steering.

He started the 1901 season with a third in the Grand Prix de Pau and then took victory in the Gordon Bennett Trophy. The race that year was held in conjunction with the Paris to Bordeaux race and though Girardot took the win it should be noted that he was the only finisher. He also finished second in the Paris-Berlin race, his last race for Panhard.

He made the trip to the USA early in September as a guest of David Wolfe Bishop, Vice-President of the Automobile Club of America, to watch the race from the Waldorf-Astoria in New York to Buffalo. The day before the race he was a passenger, along with his team mate Charron, in Bishop's car, when Bishop was arrested for speeding and locked up for a number of hours before being released to complete. Since Bishop had entered the only French made car in the race it was suggested that there was a conspiracy at foot to prevent him from chalenging the American Manufacturers. Both Giradot and Charron denounced the arrest as an outrage.

That year Fernand Charron, Emile Voigt and Girardot founded an automobile manufacturer C.G.V (Automobiles Charron-Girardot-Voigt) based in Puteaux, Paris. The three of them had made small a fortune in 1897 by buying up the complete output from the Panhard factory for six months significantly increasing the delivery time for new cars. As customers grew impatient for delivery, they started supplying dealers with vehicles at inflated prices.

He raced A CGV in 1902 but the car proved unreliable and in 1903 he again raced a CGV, this time a straight 8 50hp model. He took second in the Circuit des Ardennes which proved to be the only result for the manufacturer.

After he narrowly survived an accident in the elimination races for the Gordon Bennett Trophy in 1905 and decided to retire from racing.