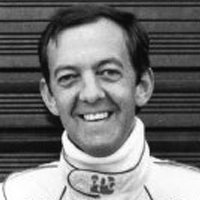 When Colman and Adrienne Candy opened his modest one-bedroom apartment they called out their brother's name. Vivian had not been heard from in nearly a week and his phone had rung out. When they found him, lying peacefully on his bed, he was fully dressed with his keys in his hand ready to go out one last time. The lonely death of the 'Candy Man' was in sharp contrast to the glamorous and gregarious life he once lived.

Vivian Candy was one of Ireland's first racing driver legends. He drove in the Le Mans 24-hour endurance race, had Nina Simone perform an impromptu concert for him in Nice, started the Marlboro Team Ireland racing team that brought Eddie Jordan the success he craved. He set up the most famous and enduring disco in Ireland, dated the most beautiful girls and sipped champagne in the top European nightclubs. He became Ireland's fastest man, drove a Formula One car in a competitive race and nearly killed himself twice in separate racing accidents. Vivian Candy lived life.

He first got behind a wheel when he was only 13 and living in Sligo where his father was county manager. He crept out the door with the keys of his mother's Morris Minor and using two cushions on the driver's seat, and wearing his father's hat for a disguise, the Candy Man chose Rosses Point as his first circuit. The minor twinge of guilt felt by Vivian Candy paled in comparison to the embarrassment he felt years later when his father decided to teach him to drive. Candy often said afterwards that this was the trickiest bit of driving he had ever done; trying to pretend that he had never sat behind a steering wheel before but that he was a very quick learner.

The family had moved up to Dublin and Candy's humour and personality meant he had no problem fitting in with his Gonzaga schoolmates. It's not that everything came easily to Candy, more that he never liked coming second and always gave everything to each new project he undertook. He decided to get into advertising and excelled at it, soon becoming joint Managing Director of Brendan White & Partners. Almost anyone else would have concentrated on this career, which had started so meteorically, but Candy was not just anyone. Money was always just a means to an end.

He bought his first competitive car, a Formula Three Brabham BT15, to race in Formula Libre, which allowed cars of different levels to race one another. One evening he got his brother to help him push start his new toy outside their house in Merton Road, Rathmines. There were no silencers on the Brabham and the deafening sound of a Formula Three racing car in full livery was heard all around the leafy gentle residences of Cowper Road and Palmerstown Road. Soon the neighbours had the Candy house on the Seventies equivalent of speed dial.

In 1971 he decided to race at the infamous Kirkistown track in Northern Ireland. He approached a corner at 130 miles per hour (210kmh) when the car suddenly burst into a mass of flames. In those days flame retardant suits and masks were unaffordable and Candy new that he was, very possibly, about to be burnt alive. Typically, he kept his cool and remembered a part of the track that had flooded overnight and still had pools of water beside it. He steered the car into one of the pools and jumped out as it crashed. He spent months in hospital recovering from third degree burns and was told he would never race again. Within six months the Candy Man was back behind the wheel.

Around about this time he and his friend Donie Bolger were looking for a way of making extra money outside of the grind of advertising and PR. They decided that there were plenty of discos for adults but that teenagers and school kids had nothing. They hit upon the idea of a teenage disco and Wesley in Donnybrook D4, or 'The Wezz' as it's now known, was born.

But Candy had no real interest in running discos; it was racing teams he wanted to run. With sponsorship from the giant American cigarette company Marlboro he bought himself a Crossley 32F Formula Ford. He brought in his good friend Eddie Jordan who drove the more powerful Chevron B29 to success in Formula Atlantic. They knew that the Marketing Manager of Marlboro UK & Ireland always asked for a packet of his company's cigarettes at every bar and restaurant he visited. So when George Macken arrived over to Dublin for a meeting about sponsorship with the boys they took him out for a good old-fashioned pub crawl. Miraculously, every pub they visited had a fresh carton of Marlboro cigarettes and Macken was delighted that his considerable racing sponsorship seemed to be bearing fruit in Ireland. Candy had his sponsorship for another year.

He held the Irish land speed record at 168.35mph (271kmh) famously beating the holder Danny Keany in a Shadow Formula One Grand Prix car at Carrigrohane, Co Cork, but Candy was getting bored. He headed for France to compete in the Le Mans 24-hour endurance race in the company of Jackie Ickx and other world-class drivers. He finished a creditable mid-table considering he would never have enough money to race a top level car.

Candy had a gift for making money but he could never make enough to satisfy his racing demands. You had to be in a big team to compete and his moment had passed. He had won World Championship points in a Porsche 935 Turbo at Watkins Glen in New York but the big teams were looking for new, younger drivers rather than journeymen pros.

He stopped for a week in a top grade Nice Hotel after Monaco and realised that he hadn't the money to pay their bill. He showed them his passport and promised he'd pay with money from home. When he reached the airport he found that his plane had left without him. He wasn't the only one. An irate lady was doing a 'Do you know who I am?' number on the British Airways desk clerk. It was famous singer, Nina Simone.

It didn't take the Candy Man long to strike up a friendship with one of the world's greatest jazz singers. He offered her a lift in his Hertz hired car, a perk of their sponsorship, and Nina and her entourage squeezed into the tiny hatchback and returned to the same hotel.

Candy realised this was his chance to make his bill go away. He persuaded Simone to sing in the bar of the great hotel. He lined up her piano player, she changed into a long black dress and Candy stood on a chair and announced the great surprise.

He should have checked that the bar's grand piano was unlocked. Nina, the pianist, the guests at the hotel and the hotel management all waited to find out what Candy was going to do next. They didn't wait long. Candy walked over to the piano and ripped the lid off the antique instrument and the concert began.

The management didn't waive his bill; they added the repair of one grand piano to it. Such is life when you are Vivian Candy. It was bittersweet, sometimes brilliant, sometimes tragic, but never dull.

He was surrounded by beautiful women, as must successful racing dirvers were. He moved in a circle that included the vivacious socialite Miranda Guinness, who had divorced her husband Lord Iveagh in 1984. They became close friends and he always treasured her friendship.

Among his effects when he died last week was a glamorous picture of her taken for a magazine in Dublin during that period of her life. It was a time when Vivian harboured hopes of settling down and having a family of his own. But it was't to be. He loved kids and even wrote children's songs, which his close friend Chris Meek still plays for his youngest child.

In June of 1995 Candy was testing Go Karts at Watergrasshill, Co Cork, with his friend Owen Breslin when he left the track. His injuries were extensive and he endured frontal lobe damage. No one really mentioned it and he never admitted it but he was never quite the same again. Whether it was the injury or just the trauma of going through a life threatening accident that caused it but Candy had lost his zest for life.

The once pristine fashion icon took less care of himself. He wasn't that interested in the high life and started to stay at home alone more often. Without racing to drive him, life seemed less important and less vital. He seemed to be biding his time. But the crowds at his funeral last week remembered a more energetic man, the sort of person everyone liked, everyone wanted to be with, every red-blooded male wanted to be. Vivian Candy was a legend.