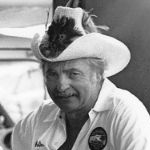 Henn opened what became the Swap Shop as a drive-in movie theater in 1963. He shortly thereafter decided to add a flea market. Through shrewd business practices and somewhat extravagant promotion, Henn was able to grow the Fort Lauderdale Swap Shop into one of the region's most popular tourist attractions. In 2005 Henn began making unusual decisions such as firing the facility's trademark circus act, and it was rumored he was selling the facility. Later that year he was involved in a violent altercation with a vendor he was trying to evict. Police used a taser to subdue him. Henn was subsequently sent to a mental hospital for again attempting to assault the vendor.

In 1983 Henn, along with co-drivers A. J. Foyt, Bob Wollek, and Claude Ballot-Lena drove his Porsche 935 to victory in the 24 Hours of Daytona. The following year Henn's Porsche 956 driven by John Paul, Jr. and Jean Rondeau placed second in the 24 Hours of Le Mans, two laps behind the winning 956 of Henri Pescarolo and Klaus Ludwig. Henn, driving with Michel Ferté and Edgar Dören, failed to finish in their Porsche 962 after ignition failure while on lap 247 (Pescarolo/Ludwig covered 360 laps). Driving in the IMSA GTP class, Henn's brand new 962 was the first time the new model was raced at Le Mans. There was another Porsche 962 in the Group C class run for British team John Fitzpatrick Racing, though it was a converted 956, making the white Swap Shop Porsche the first true 962 to race at Le Mans.

Henn also participated in offshore powerboat racing. He inexplicably ceased all racing activities a few years later and subsequently refused to discuss his racing career. Despite this, Henn still maintained an extensive exotic car collection both in his private estate and on display at the Swap Shop and was a participant of the Ferrari FXX program. His 1964 Ferrari 275 GTB/C Speciale could become the first car to sell for more than $100 million. It is one of three 1964 Ferrari 275 GTB/C Speciales ever built and it's the only one with a racing history.

His collection of supercars and race cars included a Gunnar Porsche 935 that Henn drove in 1985, a Michael Schumacher-driven Ferrari Formula One car, and the Porsche 962 that won the 1985 24 Hours of Daytona. The supercars include a Ford GT, a Maserati MC12, a Porsche 918 Spyder, a Mercedes-Benz SLR McLaren, and three Ferraris: an Enzo, an FXX, and a LaFerrari. The last car Henn purchased was a new Acura NSX. He did not buy a LaFerrari Aperta because Ferrari denied Henn the ability to purchase the car and Henn responded by suing. He later dropped the suit.