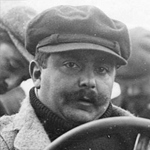 Paolo 'Paul' Zuccarelli was born in Marcilly-la-Campagne, France though, as his name would suggest, he was Italian. Along with Jules Goux and Georges Boillot and the engineer, Ernest Henry, they formed the famous Peugeot team called "Les Charlatans". Paolo Zuccarelli died 109 years ago, he was 27

He studied engineering at the l'École des Arts et Métiers in Brescia where, after getting his degree, and a short stint working as a builder in Florentia, he joined Hispano-Suiza as an engineer and driver in 1909, with his first race coming in May, in the Voiturette class of the Coupe de Catalogne in Sitges. Driving the Marc Birkigt designed Hispano-Suiza he led the race, heading the then dominant Lion-Peugeots for 3 laps before retiring with clutch failure. In June he finished 6th place at the Coupe des Voiturettes in Boulogne.

In May 1910, he finished 3rd in the Coupe de Catalogne, behind the two Lion-Peugeots and then in September he won the Coupe d'Ostende, beating Georges Boillot (Lion-Peugeot). On September 18th, he won the  Coupe des Voiturettes au Circuit de Boulogne this time beating Jules Goux (Lion-Peugeot), with his teammate Jean Chassagne finishing third. Hispano-Suiza retired from racing at the end of the year.

For 1912 Les Charlatans persuaded Robert Peugeot to build a new racing car. Swiss engineer Ernest Henry was brought in to work on the project in the greatest secrecy.

Zuccarelli with his engineering background and racing experience worked with Ernest Henry to incorporate a number of innovative ideas which led to the creation of model L76, formule libre car and the L3 in formula 3L. The 1912 Peugeot twin-cam racing engine did more to change the face of motor racing than just about any development before or since. Changing the emphasis from large displacement heavy vehicles to light weight nimbler racing cars.

On 25th and 26th of June that year at the Grand Prix de l'ACF in Dieppe Zuccarelli was forced to retire with ignition problems, the victory going to his teammate Georges Boillot.

On September 9, 1912, at the Coupe de la Sarthe run at Le Mans, he finished 2nd behind Jules Goux. A new lap record was set by Boillot and René Champoiseau finished third. Zucca, who was smaller than his team mates, won the Voiturette class also setting a new lap record. That year Les Charlatans ended the season with a total of 6 wins.

In May the following year, the Peugeot team crossed the Atlantic with Zuccarelli and Goux to race in the Indy 500, with the formule libre L3. The plan was for Zuccarelli to play the hare and force other drivers to push too hard. The plan works and though Zuccarelli retired, not before setting another lap record, with wheel bearing failure which caused a fire, leaving the way clear for Jules Goux to take the win.

He returned to France and one month later Zuccarelli was killed along with his mechanic,Fanelli, near Nonancourt while testing a racing Peugeot on the Evreux to Nonancourt road. The road was not closed to traffic and on the straight road leading to Marcilly-la-Campagne, the car took off at high speed trying to avoid a cart that had pulled into the road. There is a memorial to them erected at the spot of the accident.