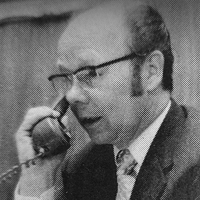 From Perth, Tommy started racing in 1954 in the highly competitive world of 500 cc Formula 3, initially with an early Cooper T11 (Mk IV) which was replaced by a more competitive Staride-Norton for the 1955 season which brought him success on the Scottish and North of England tracks such as Brough, Oliver’s Mount and Crimond near Aberdeen. Into 1956 Tommy retained the Staride, with which he enjoyed a particularly dominant day at Cadwell Park, before acquiring a second hand Lotus Eleven for 1100 cc sports car racing which was replacing F3 as the category of choice for aspiring young drivers. On his first outing with the Eleven in August at Crimond, Tommy won one race and finished second twice. A couple of weeks later he ventured into the big time at Oulton Park in The Sporting Life Trophy for 1500 cc sports-racing cars, coming home 10th in very wet conditions in a race won by the Cooper T39 of Stirling Moss from the Lotus Elevens of Keith Hall and Cliff Allison and the Cooper T39 of Jack Brabham while Tommy finished ahead of fellow 500 cc F3 graduate Jim Russell.

Tommy retained the Series 1 Eleven for 1957 and enjoyed considerable success, winning at Silverstone, Oulton Park, Mallory Park and Charterhall. In July a venture across the Irish Sea to the Dunboyne road circuit for the Leinster Trophy was not so successful, Tommy colliding with the wall of the Rathnew graveyard to the detriment of the front bodywork which he abandoned at the scene before driving back to the ‘pits’ where he removed the back half of the bodywork before re-joining the race in a now rather naked machine! Tommy already had a new Series 2 Eleven on order and this was delivered in time for its debut a couple of weeks later at Crimond where Tommy won all three sports car races. With the new car there were further victories at Mallory Park and Charterhall before the end of the season.

By 1958 Tommy had become one of the drivers to beat in small-capacity sports car racing, on occasions being a match for the official Team Lotus drivers Keith Hall, Alan Stacey, Innes Ireland, Graham Hill, Cliff Allison and Peter Ashdown. After Peter had injured himself in a crash at Rouen, suffering injuries which prevented him from driving in the Le Mans 24 Hours, Tommy was invited to take his place as co-driver with Alan Stacey in the 750 cc Lotus Eleven-Climax. They made it to the finish, albeit in last place after Tommy had had to spend a couple of hours digging the car out of the sandbank at Tetre Rouge with his bare hands. This was the year when future Team Lotus superstar Jim Clark was becoming the scourge of Scottish and North of England sports car racing with the Border Reivers Jaguar D-type and he came to regard Tommy as his strongest opponent. The combination of Jaguar cubic inches and Jimmy’s talent usually meant that the D-type prevailed but Tommy ran it close at the likes of Full Sutton and Charterhall. In September at Snetterton while battling for the lead with Innes Ireland, Tommy crashed heavily, being thrown from the car in those pre-seatbelt days, but fortunately escaping with little more than a severe shaking. In a repeat of the previous year, Tommy already had his replacement car on order from Lotus, this time one of the new Type 15s with which he finished second to the similar car of Innes Ireland at Full Sutton at the end of the month.

With a flourishing garage business to manage, Tommy raced as often as he could but rarely overseas. In the days before motorways, travelling from Perth to almost anywhere south of Hadrian’s Wall could be time consuming. However, the Fifteen was raced regularly through 1959, starting the season well with third place at Oulton Park in the 1500 cc sports car race supporting the British Empire Trophy behind the Team Lotus Type 15 of Alan Stacey and Peter Ashdown now in his giant-killing 1100 cc Lola Mk 1. The Dickson versus Clark contest continued with Border Reivers now entering a Lister-Jaguar for Jimmy for whom Tommy’s lightweight and nimble Lotus was more than a match at Mallory Park on August Bank Holiday. The Fifteen was retained for 1960 to be joined by a Lotus Elite with which Tommy immediately became one of the front runners in the small capacity GT category, well able to take on and beat the Team Elite cars. In early April with the Fifteen Tommy defeated a strong field at Oulton Park, finishing ahead of the similar car of imminent Formula 1 driver Michael Taylor and Jimmy Clark in the latest Border Reivers acquisition – an Aston Martin DBR1/300. This so impressed David Murray, le patron of Ecurie Ecosse, that Tommy was invited to drive the new Cooper Monaco T49 which the double Le Mans-winning team had acquired to supplement its obsolescent Jaguar D-types. First time out at Whitsun Goodwood Tommy won. Later he qualified second to Ron Flockhart in the John Coombs Monaco for the sports car race supporting the British Grand Prix but retired early with transmission trouble and took a comfortable victory in the national sports car race at Aintree on August Bank Holday. Also with the Monaco Tommy achieved the rare distinction of contesting a full strength non-championship Formula 1 race in a two-seater sports-racing car when he ran in the Lombank Trophy at Snetterton. In a race won by the Team Lotus Type 18 of Innes Ireland from team mate Jimmy Clark and Jo Bonnier’s BRM P48, Tommy finished a worthy ninth.

Continuing with Ecurie Ecosse and the Monaco in 1961, Tommy was up against the all-conquering UDT Laystall Lotus-Climax Type 19s of Stirling Moss, Henry Taylor and Cliff Allison so that fourth place was the best available result in most races. The Cooper was taken to the Nurburgring 1000 Ks and Le Mans, to be shared with Bruce Halford. At the German circuit, with the car being run for the first time on full tanks, the chassis cracked and the front suspension broke. At Le Mans Tommy started the race and was running in seventh place when he handed over to Bruce who crashed heavily at the Dunlop Curve on the treacherous surface, the ridiculously high windscreen required by the regulations seriously compromising Bruce’s vision.

The following year Tommy made his last appearance at Le Mans, again with Ecurie Ecosse and this time with the Tojeiro EE-Climax shared with Jack Fairman. They were going well enough in this early mid-engined GT car, which predated the Lola GT by at least 12 months, when at about 11 pm Tommy had the gearbox select two gears at once, leaving him stranded in the dark in the middle of Maison Blanche. Fortunately prompt and efficient work by marshals avoided what could have been a calamity. Tommy rarely raced again. He retired to concentrate on the development of his motor business Dicksons of Perth. However, the family name remained in the sport when his son Norman, also a BRDC Life Member, competed in Aurora British Formula 1, Formula 2 and Formula Atlantic in the later 1970s. At 5 ft 2 in and wearing thick, rimless glasses, Tommy Dickson did not look too much like a racing driver but there is no doubt that in the late ‘50s and early ‘60s he was one of not just Scotland’s but the UK’s outstanding sports car drivers.