Kenneth Paul Block was an American professional rally driver with the Hoonigan Racing Division. He competed in many action sports events, including skateboarding, snowboarding and motocross. 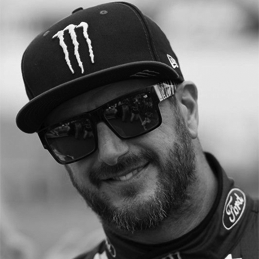 Kenneth Paul Block was born in Long Beach, California. He started competing in motorsports in 2005 entering the Rally America National Championship with a Vermont Sports Car prepared a 2005 Subaru WRX STi. With five top five finishes he finished placed third overall in the Group A and fourth overall in the Championship, his efforts earning him the Rally America Rookie of the Year award.

Block continued to race in the series, racking up numerous overall wins as well as plenty of podium appearances. He also accumulated five X Games medals since the start of his career.

Block achieved global fame through his wildly successful viral Gymkhana series of videos. With all nine of his Gymkhana videos getting over 500 million views.

In 2010, he formed the Monster World Rally Team and partnered with Ford to compete in the World Rally Championship. He aslo continued to race in the Global RallyCross Championship, X Games and Rally America.

In 2016 he raced full time in the FIA World Rallycross Championship.

Early in 2021, the Hoonigan Racing Division and Ford Performance ended theeir association after 11 years. In April, he announced that he would be returning to Subaru and in September he also announced a new partnership with Audi for work on electric powered projects. That year he also raced in the Baja 1000 in the trophy truck class finishing in 4th.

He was married to writer Tracy Montgomery in 1999 but the relationship ended in divorced. Ken later married his wife, Lucy, in 2004 and they have three children, a son and three daughters. His daughter, Lia, also competes in Rallies and first raced at the age of 11.

Block died at age 55 in a snowmobile accident near his ranch in Woodland, Utah, on January 2, 2023. The Wasatch County sheriff's department reported that Block had been riding in the Mill Hollow area when his snowmobile flipped on a steep slope and landed on top of him. Block was declared dead at the scene of the accident.

We would like to extend our heartfelt condolences to his family, friends, team mates and everyone that followed his amazing antics. A pioneer, an entertainer and an all round proper chap! R.I.P.
hr

POPULAR DRIVERS FROM US