/
Achieved successes both as a racing driver and as a rally driver in the 1930s especially in Mother Gun, the 6Â½ litre Bentley.

/
Only the fifth woman to enter a Formula One. She failed to qualify in South Africa and Mexico and after failing to qualify in Brazil she was replaced.

/hr
One of the best known female racing driver in France in the 1950's. She was both a rally and circuit driver, sometimes sharing the wheel with her close friend Gilberte Thirion. Perhaps over enthusiastic at times, during her short career from 1952 to 1956, she had several accidents. She was killed...

Louise Bryden-Brown came from a wealth family who owned what was then the largest pharmaceutical company in the world. She became interested in racing and ended up running her own Formula 1 team in 1961 and 1962. Sadly drink and drugs were became a problem and she lost interested in racing,...

/With thanks to the BRDC
Raced in Sprints and Hill Climbs. In 1961 she became the first British driver to compete in a full season of the European Mountain championship and in 1968 became the first woman to win the Brighton Speed Trials.

/historicracing.com with thanks to Christabel Watson.
In a comparatively short career, Lady Watson impressed with her natural talent competing on equal terms with her male counterparts in saloon car and sports car racing as well as rallying.

/hr
Camille Du Gast, the first woman to achieve fame as a racing driver, also excelled at ballooning, fencing, parachuting, tobogganing, shooting with rifle and pistol and mountaineering. She was also an excellent horsewoman and later, when racing was banned to women, she raced powerboats. She became...

/
Michele Dubosc was the first ever professional time keeper in Grand Prix Racing. In the days before computers the art of timing in Formula 1 was a much more complicated business than it is today.

Milka Duno is a Naval Engineer with four masters degrees. She was a leading female racing driver best known for holding the record of highest finish for a female driver in the 24 Hours of Daytona, coming second in 2007. When Milka won the Rolex Series Miami Grand Prix sharing the Howard Boss...

/hr
RenÃ©e Friderich was daughter of Bugatti driver Ernest. She was killed during the Paris-St.-RaphaÃ«l Rally at the wheel of a Delage D8S. Her brother, Paul competed in Grands Prix in 1946 and 1947.

/
Divina Galica MBE (Member of the Order of the British Empire) is best known for her Olympics career and her motorsport racing career.

/Thanks to Gary Horstkorta
Judy Ganley was an accomplished driver, race team member and race team administrator. She raced a Sprite and Mini-Cooper with the San Francisco Region of the SCCA in the late 1960s and early 1970s. In 1970 she drove a Le Mans Sprite Prototype with Janet Guthrie and Rosemary Smith to a class win and...

/
Janet Guthrie is the first woman to qualify and compete in both the Indianapolis 500 and the Daytona 500.

/www.lizhalliday.com
UK based Californian, Liz Halliday, is an international motor racing driver who competes in Sportscar and GT endurance racing and is also an international equestrian in Three-Day Eventing. /
Sunny Hobbs is an accomplished female racecar driver with diverse racing experience on both oval tracks and road courses, sports cars and stockcars.

/
Regarded as one of the greatest female drivers in Grand Prix motor racing history. However with communist rule in Czechoslovakia she was largely forgotten by the motor racing world until recently. She nearly won the 1928 Targa Florio in her Type 35B Bugatti but rocks mysteriously appeared in front...

/Speed Queens
Nettan Lindgren, a feisty female Swedish racing driver well known for her broad experience in various formulae, most notably Swedish Touring Cars. In Britain she is most famous for her contretemps with former F1 driver Jonathon Palmer after he had punted her off the track.

/www.cindilux.com
Cindi Lux is a professional racing driver and high performance driving instructor. She competes in the SPEED World Challenge GT Series. She has also competed in the Petit Le Mans endurance series.

/www.winfield.50megs.com
Elfrieda Mais drove in sped trials and did exhibitions of stunt driving as she was not allowed to compete against men. She married Johnny Mais who drove at Indianapolis in 1915. She was killed when a stunt went wrong at the Alabama State Fair in 1934. 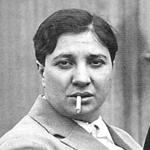 /historicracing.com
Violette Morris's story is a not comfortable tale. Indeed some historians have shied away from her completely. Disturbing and bizarre she is never the less worth including if for no other reason than to illustrate the full spectrum of people involved in our sport.

/Franca Davenport
Pat Moss-Carlsson was one of the most famous women in British motorsport. 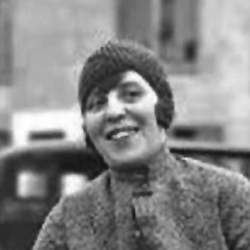 Irish-American Lucy Schell, the only child of an American multi-millionaire of Irish origin, Francis P O'Reilly, was most famous as the owner of the semi-works Delahaye racing team from the 1930s onwards. She lived in France where she met her husband was pre-war driver, Laury Schell. Their son...

/historicracing.com
Italian rally and touring car driver of the 50s and 60s. Drove in the Targa Florio several times and was a top ten finisher in touring car races.

/historicracing.com
Anna Maria Peduzzi was one of the best female Italian drivers of her time. She won her class in the Mille Miglia in 1934 and raced in the Targa Florio five times.

/wikipedia.org plus other information.
Born in Toronto, her husband bought her a Wolseley Hornet in which she started racing. She also raced Austins, Invicta, a Bugatti and the ex-Cobb 10.5 litre Delage. She had a serious crash on the Brooklands Byfleet banking during practice for the 1937 BRDC 500 and though she raecovered completely... 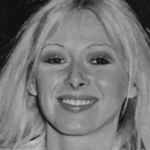 /Speed Queens
Monique Proulx was a Québécois driver who raced mostly in Canada in the 1970s.

/wikipedia.org
Shawna Robinson is a female NASCAR driver. Currently without a ride, she made history in 1984 by becoming the first woman to win a major super speedway points race at the famed Milwaukee Mile Bobtail 100.

/
Anni Roosdorp started racing in 1947, driving a Veritas single-seater at the Grenzlandsring in Germany. Her father, Hermann Roosdorp, also raced. 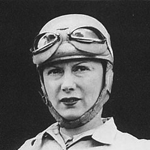 /hr
Averil Scott-Moncrieff started out racing a Bugatti but soon switched to one of the first Lotus VIs. She competed in a lot of races with great reliablity and usually finished near the front.

/historicracing.com
Louise Smith was one of the true pioneers of early stock car racing, running Modifieds from 1946 thru 1956 and actually competing in the first stock car race she ever saw. /
Amanda is a well known radio and television presenter who also writes for a number of newspapers and motoring journals. She has been involved in motor sport all her life competing in historic racing as well as ASCAR and the FIA GT Championship.

/
Became the first woman to win an F1 race when she won a round of the Aurora F1 series at Brands Hatch in 1980. In 1981 she finished 6th in the non-championship South African GP.

/speed-queens
Affectionately know as "Bill", Elsie Wisdom was one of the first female winners in a mixed race at Brooklands, the 1932 JCC 1000 Mile Race with Joan Richmond. Aside from winning on the track she was also successful in rallying, winning the International Alpine Trial in 1936.