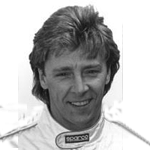 Robb Gravett is a British racing driver who won the 1990 British Touring Car Championship and finished 2nd in his class in 1988 and 1989, in a Ford Sierra, the most powerful car of the era. There were 4 different classes of cars racing for the same title in those days, each scoring points based on where they finished among their own class. Andy Rouse and Steve Soper were his main 1990 rivals.

The championship changed to a single-class in 1991, and Rob raced a Sierra in 1991 and a Peugeot in the next 2 seasons, however he was short on good results. He didn't have a drive in 1994, and returned a year later as an Independent driver. Despite occasionally humbling the manufacturer teams, he never gained a drive with them again, and retired at the end of 1997.