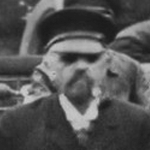 Unfortunately for him he is best know for becoming motor racing's first recorded fatality.

Renaud de Montaignac died 124 years ago, he was 47

Local enthusiasts had organised a 90-mile event to run anti-clockwise on public roads driving from Mussidan to Bergerac and then back through Le Bugue. The field comprised 10 cars and eight motorcycles.

This was in the days of tiller steering, a far more sensitive and fragile method of directing a motor vehicle, any lapse of concentration could be fatal and thus it was as he passed he raised a hand to thank his friend, lost control, swerved across to the right and collided with the front of the Parisienne causing it to run off the road and roll over. de Montariol lept clear but his riding mechanic, B. Lestages, was trapped under the vehicle and sustained head injuries.

de Montaignac continued but on hearing the crash and realising that he had caused an accident, he looked back and instantly swerved violently to the right, ran up over the bank into the field where it also rolled. M de Montaignac was very badly injured crushed under the 800 kilo Landry et Beyroux. His ribs were  broken as were his legs. He died three hours later, though he survived long enough to admit that the incident had been all his fault. His unfortunate mechanic, A. Hezard, was also severely injured and died later.