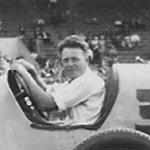 Speed Adams had been racing for eight years, and was well-known as a dirt track racer across the United States. He ran in the "outlaw" ranks of the time, such as the IMCA, the CSRA and others. He probably raced at times under an assumed name to avoid penalties from the sanctioning bodies. A good friend was Gus Schrader, considered to be the ranking King of the outlaw drivers.

Adams was born on a farm in Linn County, Iowa to Linley C. and Eva M. Adams. He appears to be an only child. He attended Hillsdale rural school and graduated from Marion High School in 1920 when he was 16. Since Adams was interested in mechanics, his father bought him the 8th Avenue garage in Marion. He worked as an auto mechanic for four years before becoming a full-time professional race driver. The 1930 census lists him as a "farm laborer." Most likely, he was just helping his dad with the farm during the winter months.

Adams purchased his first race car in 1924 and began racing throughout the United States. As his reputation developed, he was hired by Joe Kinsey of Sherrard, IL, and drove for him for several years, almost exclusively on dirt tracks. Adams had been offered a ride in the Indianapolis 500, but had to turn it down because of his contract with Kinsey. Another driver was given the ride and crashed to his death at Indy.

Adams was racing at the Tennessee State Fairgrounds track in Nashville in late September 1932. He was driving the Kinsey Special, a Frontenac - Ford race car formerly driven by his buddy Schrader. The sanctioning organization for the race is not known, but it easily could have been a stop on IMCA's state fair circuit. The dirt oval was dusty, as was typical of horse-racing tracks. On the fourth mile of a ten mile race, Adams was in fourth place. Entering a turn, blinded by the dust, Adams ran into the car of Sherman "Red" Campbell, a CSRA champion. Adams car ran over Campbell's rear wheel, the two machines locked wheels, spun around, separated, and collided again. On the second impact, Adams was throw out and his body slid across the track into an iron fence, causing head and chest injuries. Campbell's car also overturned and its driver was thrown out. Speed Adams was killed instantly; Red Campbell drove in the next race.

Adams was survived by his parents, a grandmother, several aunts and uncles, and two cousins. He was buried in Oak Shade Cemetery in Marion, Iowa.